A week or two ago I came across a post on the RabbitMQ Users forum, about how to communicate from SQL Server to RabbitMQ. Seeing that we do that a lot at Derivco, I came with some suggestions, and also said that I was writing a blog-post about how it can be done. The part of writing was not entirely correct - at least not until now (sorry Jim, it’s been hectic at work).

SQL Server is awesome, and it is super easy to get data into the database. Getting data out is easy as well by querying the database. What is a bit tricker though is to get data out at the time the data is inserted or updated. Think real-time events; a purchase is made - someone needs to be notified about it at the very second it happens. We can arguable say that the data we are interested in should not be pushed out from the database, but from somewhere else. Sure, that is true - but quite often you don’t have a choice.

This was the case for us - we needed to send events out of the database for some further processing, and the question was how to do it.

NOTE: If you read the book, you can find us covering a couple of features that never made it to RTM.

SSB survived, and in SQL Server 2008 Feature Pack, Microsoft introduced Service Broker External Activator (EA). This is a way through SSB to be able to communicate outside of the local database. The theory sounds good, but in reality, it is cumbersome and convoluted. We did some tests with it, but we quickly realized it didn’t do what we wanted. Also, SSB did not give us the performance we needed, so we had to come up with something else.

NOTE: I wrote “almost” above, as there actually are certain limitations. For this discussion however, the limitations have almost no impact on what we want to do.

The way SQLCLR works is that you compile your code into a dll, and you then register the assembly with SQL Server:

The code does the following:

When the assembly is created you create wrappers around the .NET methods in your assembly:

The code above does:

NOTE: When creating the procedure, the assembly name is not case sensitive, however the fully qualified type and method name are. There is no requirement that the procedure name being created are the same as the method name. However, the eventual data types for the parameters have to match.

As I mentioned before, at Derivco we have the requirement to send data out of SQL server, and for that we use SQLCLR and RabbitMQ (RMQ).

RMQ is an open source message broker software that implements the Advanced Message Queuing Protocol (AMQP), and is written in the Erlang programming language. As the RMQ is a message broker, you need AMQP client libraries to connect to the broker. Your application references the client libraries, opens a connection and send messages - think ADO.NET to SQL Server. As opposed to ADO.NET, where you most likely opens a connection each time you communicate with the database, you will keep the connection open for the lifetime of the application.

So, in order to be able to communicate from the database to RabbitMQ we need an application and the .NET client library for RabbitMQ.

NOTE: In the rest of this post three will be some code snippets showing RabbitMQ code, but there won’t be much explanation what they do. If you are new to RabbitMQ I suggest you have a look at the various RabbitMQ Tutorials, to get a feel for what the code is doing. The Hello World tutorial for C# is a good place to start. One thing different between the tutorials and the demo code is that in the demo code no exchanges are declared. The expectation is that they are pre-defined.

RabbitMQ.SqlServer is an assembly that uses the .NET client library for RabbitMQ and exposes functionality to post messages from the database to one or more RabbitMQ endpoints (VHosts and Exchanges). The code can be downloaded/forked from my GitHub repository RabbitMQ-SqlServer. It contains source code of assemblies as well as install files (so you don’t have to build from source).

NOTE: This is demo code, to give an idea how SQL Server can call RabbitMQ. This is NOT production ready code in any shape or form. If the code burns down your house and kills your cat - don’t blame me - it is DEMO code.

When the assembly is being loaded, either due to en explicit call to initialize it - or implicit by calling wrapper procedure, the assembly loads the connection-string to the local database where the assembly is installed, as well as RabbitMQ endpoints, to which it also connects:

Code Snippet 3: Connection to an Endpoint

While part of connecting to the endpoint it also creates IModels on the connection, and these are used when posting messages:

The Post method is called via the method pr_clr_PostRabbitMsg(int endPointId, string msgToPost) which is exposed as a procedure to the CREATE PROCEDURE statement in Code Snippet 2:

Code Snippet 5: Method to be Exposed as Procedure

When executing the method the assumption is that the caller sends in the id of the endpoint to which to send the message, as well as the actual message. If -1 is sent in as endpoint id, we loop through all endpoints and send it to all. The message comes in as a string and from the string we are getting bytes by using Encoding.UTF8.GetBytes. Calling Encoding.UTF8.GetBytes should in a production environment be replaced with some type of serialization.

In the src\sql folder are all files needed for installing and running this demo code. To install:

Before continuing, you need to have an RabbitMQ broker up and running and a VHost (the default VHost / will do). We tend to have quite a few VHosts, purely for isolation purposes. The VHost also needs an exchange, in the demo code we use amq.topic. When you have a RabbitMQ broker you edit the parameters in the rmq.pr_UpsertRabbitEndpoint procedure which is in the 04.upsert_rabbit_endpoint.sql file:

Let us start with the SQL server versions that run on CLR 2, as it is not completely straight forward what to do. We know that we need to deploy the assembly we wrote, and we also need to deploy the .NET client library assembly for RabbitMQ (RabbitMQ.Client). The RabbitMQ client library should be referenced from our assembly. As we target CLR 2, our assembly as well as the RabbitMQ.Client need to be compiled against no later .NET version than 3.5. This is where there are some issues. 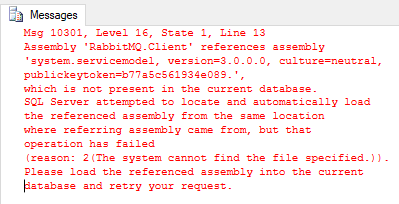 This version of the RabbitMQ.Client references an assembly which is not part of CLR inside SQL Server. It is a WCF assembly, and when I - above - wrote of certain limitations in SQLCR, this is one of them: that particular assembly are for all intents and purposes not allowed to run within SQL Server. The latest versions of RabbitMQ.Client does not have this reference, and can therefore be used without any issues - apart from that “pesky” CLR 4 requirement. What to do?

Well, RabbitMQ is open source, and we are developers so, let’s recompile from source. Before the latest releases of RabbitMQ.Client (i.e for versions <3.5.0) I removed the System.ServiceModel reference, and re-compiled. I did have to change a couple of lines of code which used functionality from System.ServiceModel, but it was minor changes.

For this demo code I did not use the 3.4.3 version, but grabbed the 3.6.6 stable release, and recompiled using .NET 3.5 (CLR 2). That almost worked :), except for that later releases of RabbitMQ.Client uses Task’s, which are not part of .NET 3.5 natively.

NOTE: The source for the RabbitMQ.Client from which I built the .NET 3.5 version is in my RabbitMQ Client 3.6.6 .NET 3.5 GitHub repository. The compiled dll together with the System.Threading.dll for .NET 3.5 is also in the lib\NET3.5 folder in the demo code (RabbitMQ-SqlServer) repo.

To install the necessary assemblies (System.Threading, RabbitMQ.Client, and RabbitMQ.SqlServer) run the install scripts from src\sql, in following order:

To install you run the install scripts from src\sql, in following order:

To create procedures that can be used from created assemblies (3.5 or 4), you run the 06.create_sqlclr_procedures.sql script which creates T-SQL procedures for the three .NET methods:

The script also creates a “pure” T-SQL procedure - rmq.pr_PostRabbitMsg - which executes against the rmq.pr_clr_PostRabbitMsg. This procedure is a “wrapper”, which knows what to do with the data and handles errors etc. In production we have multiple procedures like this, handling different types of messages. More about that in Usage below.

From all of the above we can see that to post a message to RabbitMQ we call the rmq.pr_PostRabbitMsg or rmq.pr_clr_PostRabbitMsg with an endpoint id and the message in string format. That is cool, but how would it be used in the “real world”.

What we do in the production systems - in the stored procedures that processes data and the data should be sent to RabbitMQ - is to build up the data we want to send and then in a “hook point” we call the equivalent of rmq.pr_PostRabbitMsg. Below is a very simplified example of such a procedure:

In Code Snippet 7 we see how the data to be sent is captured in the procedure, and when processing is done the data is sent. To use this procedure execute the 07.create_processing_procedure.sql script in the src\sql folder.

Make it All Happen

At this stage you should now be ready to send some messages. Before you test it, make sure you have a RabbitMQ queue bound to the exchange your end-point in rmq.tb_RabbitEndpoint points to.

So, to test this: