In Internals - III and Internals - IV, we looked at how the launchpad service creates RTerm processes when we execute an external script.

The Internals - IV post came about due to an email from Bob Albright (@bob_albright), pointing me to some resources (a blog-post) regarding the processes the launchpad service creates.

In his email Bob also, kindly enough, attached some code. The code highlighted some behavior when creating the RTerm processes, especially around parallelism. In this blog-post we’ll follow up on that and look into the effect parallelism has on process creation.

In Internals - IV, we saw how:

Previously I had the assumption that “somehow” the number of processes created had to be configurable, and that the reason for creating multiple processes has to do with performance.

In the post we verified that, and this was much due to the blog-post Bob pointed to in his - previously mentioned - email. That particular post also briefly mentioned MAXDOP, and what to think about in terms of pool size. That and Bob’s code lead to this blog-post.

Before diving into the “stuff”, let’s look at the code we’ll use. The code we have used in previous posts has been very, very minimal. Today we’ll be “very advanced” and select data from a table in a database - talk about cutting edge!! What we want to do is to execute some linear regression functions against data, and see what happens in different scenarios.

In Code Snippet 1 below, we set up the database and a table with some data we can use, all in all 30 million records:

The data is completely “useless”, but it can at least be used for analysis work, it looks something like so (just a few rows):

What we want to do with the data is to create a linear regression model over it, where - ultimately - we want to predict the value of y, and we believe y is related to rand1, rand2, rand3, rand4 and rand5. In our examples we are not really interested in y, but we want to see what the intercept value(s) is. If we used open source R (CRAN R), the code for this would look something like so:

Seeing that this is about SQL Server R Services, we should be using the equivalent RevoScaleR function: rxLinMod: r <- rxLinMod(y ~ rand1 + rand2 + rand3 + rand4 + rand5, data=<some input data>);, and we would execute it from sp_execute_external_script:

So the code in Code Snippet 3 is what we will “play” around with in this post. Some comments:

So the blog-post is about what impact parallel processing will have on the process creation, but before we go down that “rabbit” hole, let’s see what it looks like during non-parallel execution:

In Process Explorer you should see something similar to this:

What you see in Figure 1 matches pretty good with what we discussed in Internals - III and Internals - IV; while a single user executes sp_execute_external_script 6 RTerm processes are alive, and one of the processes is the process where the script executes under. In this case it was process id 10120, and we determined that from the CPU value (.32) as well as Private Bytes: 1,023,376 K and Working Set 189,268 K respectively. We can further confirm the process the code executed under by looking at the result coming back:

From Figure 2 we can indeed see that the process id was 10120, and that we ran the regression model over 30 million rows. The time it took to execute the code was ~16 seconds. The query plan looks like in Figure 3:

In Figure 3 we see how we do clustered index scan for our rows and then hand it over to the UDX operator. The UDX operator comes normally in play when we do XML related processes, but - as we can see - it also comes into the picture for external scripts. It kind of makes sense as it is an Extended Operator.

This is all well and good, but it is not really anything new from what we discussed in Internals - III and IV.

So what about parallel execution? When you read documentation about SQL Server R Services it always mentions how efficient it is to execute external scripts as one can utilize SQL’s parallelism. How does this work then? In “normal” SQL Server parallelism, SQL Server decides whether to execute a statement in parallel or not, and the MAXDOP setting defines the number of processors the statement will execute on.

For SQL Server R Services it works in a similar way, except that you have to explicitly say that you want to execute in parallel. To specify parallel execution you use a parameter on the sp_execute_external_script procedure: @parallel. The parameter can either be either 0, no parallelism which is default, or 1.

NOTE: Even if you specify that you want to execute in parallel, SQL may choose not to do it.

So in order to enable parallelism, we need to add the parameter to the stored procedure, and in Code Snippet 4 below we have inserted the parameter right after @input_data1 parameter:

So let’s see what impact the change we did in Code Snippet 4 has. For now we will not look at the RTerm processes, so you can just execute the code with the @parallel = 1 parameter set. On my machine which is a 4 core machine with hyper threading (i.e. 8 processors) and MAXDOP is set to 0 (use all processors), I get the following result when I execute:

In Figure 4 we see how the results are returned from 8 RTerm process id’s. This is to be expected when SQL uses parallelism and MAXDOP is 0. Oh, and BTW - according to people “in the know” you should not have MAXDOP set to 0 if you run on an HT box. Here is an article about MAXDOP settings.

We also see from Figure 4 that we executed in ~8.7 seconds, roughly half the time it took when we didn’t use parallelism.

NOTE: There is no guarantee that you will improve performance by using parallelism, so it is a good idea to always test against the workloads you are using.

The query plan from the execution also shows parallelism:

The interesting part with the query plan, as Bob pointed out to me, is that the UDX operator gets pushed before the Parallelism operator.

Let us now get back to what we started this with; how parallelism affects process creation. From what we have seen above, we can be fairly certain that 8 processes have been created, but let’s make sure that it really happens:

On my box the RTerm processes looks like so: 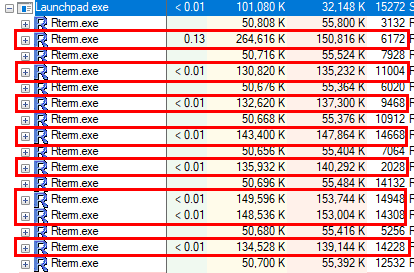 However if the level of parallelism (tasks) are less than the number of processes to be created, (5 by default or the value of PROCESS_POOL_SQLSATELLITE_GROWTH), then the launchpad service creates as many process as required so that there always is the required number of processes in the pool.

An example of this is if PROCESS_POOL_SQLSATELLITE_GROWTH has not been set, and we are working with 5 as default; if the level of parallelism is 4, then 9 processes will be created - 4 for execution, and 5 for the pool.

So why would the level of parallelism be less than the required number of processes? Well, we may execute on a box with few processors, maybe not so likely, or MAXDOP is set (see below).

So far we have used RevoScaleR functions in our script code, what happens if we want to use a CRAN R function instead. Something similar to what is in Code Snippet 2? That works fine as well, multiple RTerm processes will process the data. I will not show the code here, but you can easily try it our yourselves.

So MAXDOP is a way to indicate to SQL Server how many processors to execute a piece of code on. Or rather, it is a way to limit SQL Server from running a statement over all processors on the box. As this post is not about MAXDOP as such, I won’t go into details about it, but if you want to know more here is an MSDN article covering MAXDOP. Anyway, MAXDOP is set on SQL Server instance level, but can also be used as query hint on individual queries.

The code in Code Snippet 5 will now restrict the parallelism to use 4 processors, and results coming back will show 4 different process id’s, and - as I mentioned above - during execution there will be 9 RTerm processes created, and when the execution has finished 5 will be in the process pool.

All this seems pretty straight forward, however what is unclear for me is how the interaction between SQL Server and the launchpad service works when executing with parallelism. On the SQL Server side we can see how multiple tasks and workers are invoked when parallelism is in play by executing something like so:

The result from the query window where you execute the code from Code Snippet 6 looks something like what you see in Figure 7: 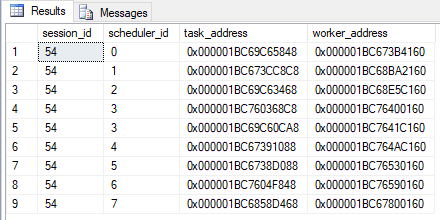 Ok, we see multiple schedulers, tasks and workers being active when we execute our code, and there is nothing strange in that. Seeing that, I would then have expected that there would be a one-to-one relationship between the tasks and the calls into the launchpad service, but that is not the case.

I verified that by “firing up” my trusted debugger WinDbg and attached it to the launchpad process, similar to what we did in Internals - II. I then set a breakpoint at launchpad!CLaunchContext::LaunchServTask, and executed the code. My expectation was that I would see how the breakpoint was hit multiple times when I executed with parallelism.

In this post I wanted to look at how parallelism affects the creation of RTerm processes in SQL Server R Services. The conclusion is that it does:

So that’s for now! Thanks once again to Bob for his input and code!! And as I mentioned above, if anyone has input how SQL Server interacts with the launchpad service, when parallelism is in play - I’d be more than happy to hear about it.