Sorry guys, in my last post Internals - XII I said we’d - in this post - look into the Binary eXchange Language protocol(BXL) which is used when sending data from SQL Server to the SqlSatellite. The protocol is also involved when we send one row of data containing 5 integers, and the packet size for that ends up being 6300 bytes.

Well, we won’t look at that in this post, I was once again led astray when researching how data is sent.

What we will look into however is something we haven’t really discussed at all before, and that is: when is the SELECT statement for the @input_data_1 parameter executed?

However, before we get into all this, let us do a recap.

In he last two “episodes” in the internals we have looked what packets are being sent between SQL server and the SqlSatellite. In Internals - XI we looked at how SQL Server connected to the launchpad process, and how that caused the SqlSatellite to open a socket connection to SqlServer. Connection of the socket caused two authentication packages to be sent to the SqlSatellite from SQL Server. The process was illustrated as in this figure: 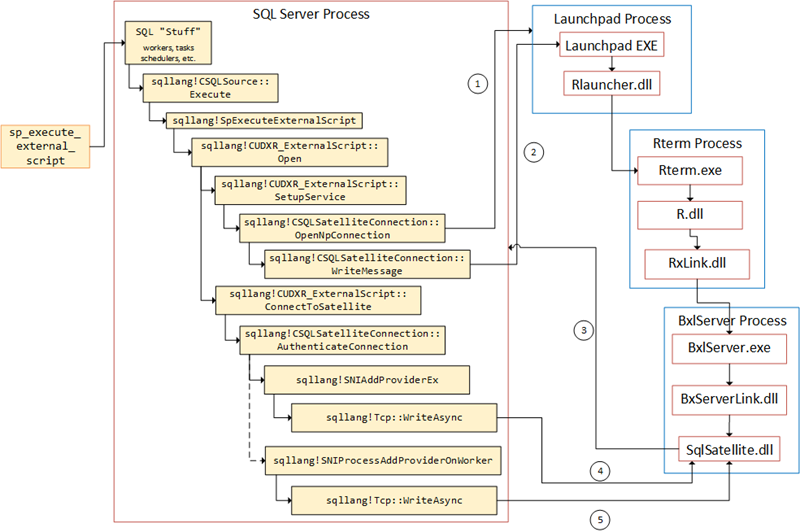 In essence, Internals - XI was all about connection and authentication. In [Internals - XII] we looked at what data packages were sent to the SqlSatellite from SQL Server, and we saw how both script as well as any result for @input_data_1 was sent. We used following figure to illustrate how the data was sent, and from what routines: 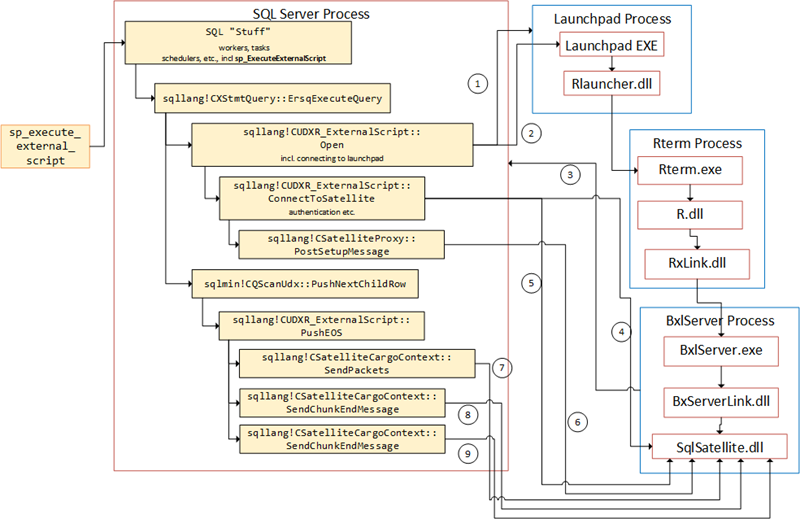 To help us figure out the things we want, we will use WinDbg and Process Monitor:

NOTE: What I wanted to do in the new WinDbg was to set event filters. For the life of me I could not find out where and how to do it.

In most of the other posts in this series, the code we have executed haven’t required a specific database or tables. In this post we’ll use a specific database with some tables. The code to create the database, tables and populate data looks like this:

I haven’t listed any execute statements, as they will differ throughout this post.

Execution of SELECT Statement for @input_data_1

So in quite a few installments of the Internals series, data for the parameter @input_data_1 has been sent to the SqlSatellite, and in Internals - XII we saw what routines were involved when sending it. What we haven’t discussed however, is at what stage in the flow the statement in the parameter gets executed. The few times I have thought about it, I assumed it was sometime after the external script has opened, as I saw it being part of the script. Let’s find out.

To do this you need to run the old version of WinDbg, as we’ll enable an event-filter so the debugger breaks at an C++ EH exception. In the Event Filters dialog you can set how that particular exception should be handled. We want it to be enabled, but not handled:

The idea is that we will execute something with an invalid statement for the @input_data_1 parameter, and after having set the C++ EHexception filter we will be able to see the call-stack leading up to the exception.

As you see in Code Snippet 2 we are doing a SELECT and we are referencing a column - ColInt3- which does not exist in the table. When you execute you immediately hit the break-point at sqllang!SpExecuteExternalScript, and after you continue, you break for an exception. At this point, check the call-stack: k:

Notice that the exception happens right after the SpExecuteExternalScript but before any of the other breakpoints. That would, sort of, indicate that my assumption about the statement being executed after the opening of the script be incorrect. When you look at the call-stack, it seems that the exception happens during something that has to do with compilation of the query: sqllang!CSQLSource::FCompile. I guess it makes sense that SQL Server would check if the query is syntactically correct and also that the objects exists (in our case there is no column named ColInt3).

So what would happen if we executed a statement that caused a runtime exception. Let’s say we did a SELECT with some computation that resulted in an exception, would we fail at the same stage as above? So let’s see what happens if the code we execute looks like so:

When we compare the call-stacks in Code Snippet 3 and Code Snippet 5 we see how the paths are different. It seems that when having @input_data_1, some optimization and compilation of the statement happens first, and the statement is actually executed when the connection to the satellite has happened, and it looks like that happens inside sqllang!CXStmtQuery::ErsqExecuteQuery.

If we think back to what we covered in Internals XI and XII, and we “merge” that what we have seen so far in this post, it seems that sp_execute_external_script has three distinct phases:

OK, if we let the code continue after having hit the exception and looked at the call-stack, we’ll see something somewhat interesting (strange) in the message tab in SSMS:

When looking at Figure 4 it seems that SqlSatellite is confused about something, almost like it would have received a packet/something which it couldn’t handle. That would make sense if a packet actually were sent to the SqlSatellite with the result from the SELECT, and potentially the data was corrupted due to the null exception.

In Figure 5 we initially see what we expect:

But after the script package we see a packet with the length of 28, what is that? Also, we do not see any packet that would be related to the data, so the idea that the SqlSatellite received a packet it could not handle may not be correct. So, where does the message about the SqlSatellite and data chunks in Figure 4 come from?

Let’s set some breakpoints and see what we can figure out:

When we execute we hit:

After the second PushRow we break at the exception, and when we let the code continue, we get the error message back, but we also see that a packet with a length of 28 is sent to the SqlSatellite. So, if the packet is not coming from the SendChunkEndMessage routine, where does it come from then? Let’s do what we did in Internals - XII when we did not know from where a packet was sent - set a breakpoint at mswsock!WSPSend. The theory behind this is that, at one stage or another, a low level socket call needs to take place. After you have set the breakpoint, execute again and now the breakpoints are hit as follows:

NOTE: The reason we get two PushRow is that we are selecting two rows from the table.

Continuing after the exception we will hit mswsock!WSPSend, and checking the call-stack - it looks like this:

Code Snippet 7: Call Stack at the Time a Packet is Sent

Ah, from the call-stack in Code Snippet 7 we can see how the exception brings us back to sqllang!CMsqlExecContext::FExecute and from there we go down a code path which eventually comes into the sqllang!CSQLSatelliteCommunication::SendAbort routine, which sends the packet with a length of 28.

We have now an explanation to the packet with a length of 28, it is SQL Server telling the SqlSatellite, that it aborts the process. The question about the message we see about SqlSatellite not being able to read the data chunk is not as straight forward though.

Initially I thought the message came from inside SQL Server, but based on some tests I did, I believe the message originates in the SqlSatellite after the satellite has received the abort message. Reasoning behind this is based on that the message does not “smell” like a SQL Server Error message; it doesn’t have an error number attached and it looks a lot like the output you’d get from the external script engine. Remember from Internals - VII where we discussed files and sub-directories created by the launchpad service as well as the external engine, how - by default - two files are created by the launchpad service:

To be able to investigate this, I did what we did in Internals - VII:

NOTE: By setting the JOB_CLEANUP_ON_EXIT to 0 we tell the launchpad service to not delete any directories etc., after we have executed (the executing process will still be torn down though).

After executing the code in Code Snippet 4 I browsed through the various subdirectories of the user account directory in C:\<sql_instance_path>\MSSQL\ExtensibilityData (most likely MSSQLSERVER01), to find the directory which the process executed under. This directory has four files in it and one sub directory (the other directories are either empty, or has three files and a sub directory):

As we can see in Figure 6 the stderr.txt files has a size greater than 0, and when opening I could see the same message as in SSMS:

Based on this, it seems that particular message comes from the SqlSatellite and the external engine. Oh, when I executed the code in Code Snippet 2 (fails during compilation), stderr.txt was not written to. E.g. the error happened before the SqlSatellite had been initialized. In a future post we will look more at what goes on when data - results as well as errors - come back to SQL Server.

In this post we set out to try to understand when and how the statement that makes up @input_data_1 is executed. We saw:

We also saw that if an error happens after the satellite has been initialized, SQL Server sends an abort message to the satellite in the sqllang!CSQLSatelliteCommunication::SendAbort routine.