By the time I publish this blog post MS Ignite is over. During Ignite, Microsoft announced quite a few new things, amongst them SQL Server 2019 with a whole lot of new features and functionality.

I touched briefly on some of them in my What is New in SQL Server 2019 Public Preview post. A couple of things that caught my eye were that SQL Server 2019 for Linux now supports In-Database analytics, what we know as SQL Server Machine Learning Services (R and Python), as well as the Java language extension.

NOTE: You may ask yourself what the Java language extension is; well, that is the ability to access Java code from T-SQL. It is a little bit like SQLCLR, but it executes outside of the SQL Server memory and process space.

Seeing that I never really have played around with SQL Server for Linux, mostly due to that in previous versions (2017) it did not have support for In-Database analytics, I thought that now would be a good time to have a look.

Cool, so install SQL Server 2019 for Linux and start to play around! Hmm, what do I install it on - I am a Windows guy, this whole Linux thing is “scary”. Ok, I guess I could spin up a virtual machine and install it there, but I am lazy. Create a VM, and then install SQL Server seemed like too much work.

Then I thought about my mate and colleague Charl Lamprecht, a.k.a The Donut Maker, and how he raves about Docker. So maybe I should run SQL Server 2019 for Linux in a container, problem solved. Uh, maybe not; you see - I have never used Docker. I am an old guy (some would even call me a “Grumpy Old Man”, a GOM), and you know the saying about old dogs and new tricks.

So anyway, I decided to give it a go; how hard can it be (it turns out not hard at all), and this post is about the steps I took to get SQL Server 2019 for Linux running in Docker on Windows.

This post does not cover how to download and install Docker for Windows, as there are lots of posts out there about it. If you want somewhere to start; Get started with Docker for Windows is an excellent starting point.

I do, however, want to point out a couple of things, that caught me out:

You can change the choice between Linux and Windows containers from the Docker icon in the system tray (right click on the icon): 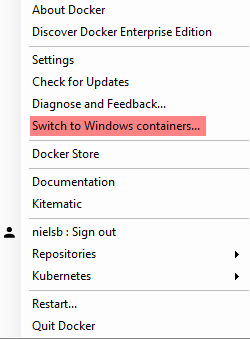 In Figure 1 we see the menu entry to change the Docker container type to Windows. To change container type works the other way around as well; changing from Windows to Linux.

Before we look at how to get and install the SQL Server “stuff” let us discuss some basics, and let us start with some vocabulary:

In our case we:

The interaction with Docker (download image, create a container, etc.) is via CLI (Command Line Interface), using the docker base command followed by child commands and options/parameters (docker childcommand). Examples of child commands:

To see a full list of commands you can go here.

As I mentioned above, we interact with Docker via the command line, and when you are on Windows, you most likely use Powershell. In this post I do it somewhat differently in that I do not use the actual Powershell shell, but instead Azure Data Studio.

We can think what we want about the “blurb” above, but ADS does have some interesting features, and for the Docker CLI work we use the integrated terminal: 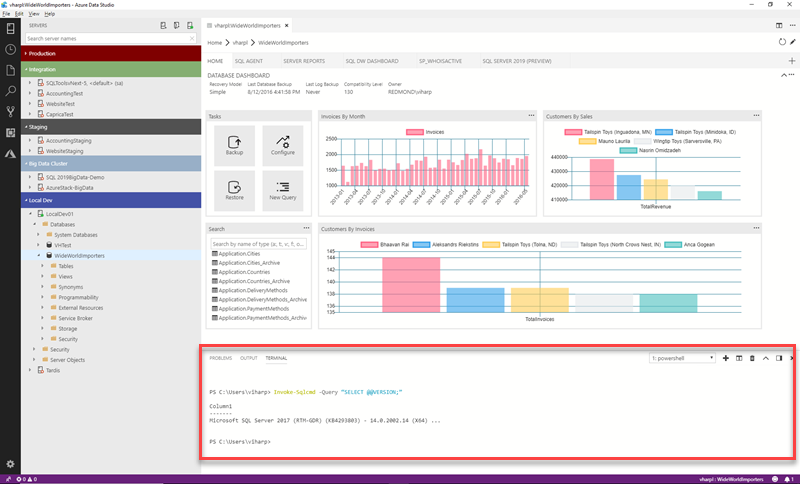 What we see in Figure 2 is ADS with visualised resultsets, some dashboards and - outlined in red - the integrated terminal. Now, let us get down to business.

Getting the SQL Server 2019 for Linux Image

We get the SQL Server 2019 for Linux Docker image from the Microsoft Container Registry (MCR). MCR acts as a single download source for Microsoft’s container images. Regardless of where customers discover Microsoft images, the pull source is mcr.microsoft.com.

To get the image I open Azure Data Studio:

We see in Figure 3 how I have the 2k19_linux.ps file open in the ADS editor, and how that file contains some Docker commands. I open the integrated terminal in ADS through Ctrl + `, or by using the menu: “View | Command Palette | View: Toggle Integrated Terminal”: 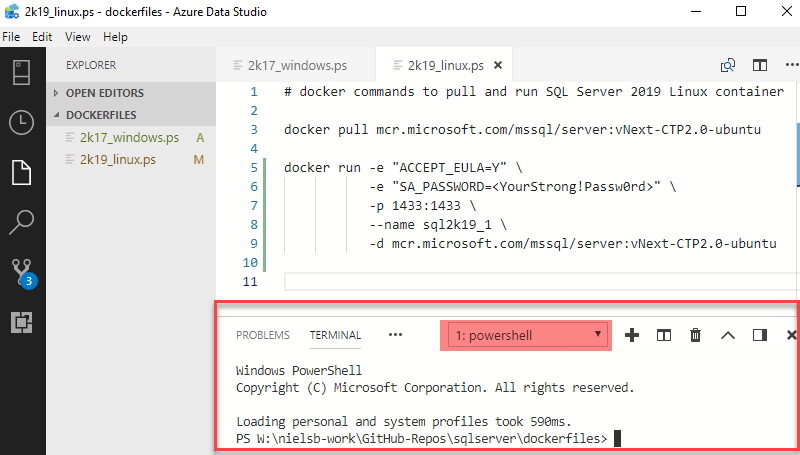 In Figure 4 we see how the terminal is open (outlined in red) and it is the Powershell terminal (highlighted in red).

NOTE: The reason I use ADS is that I wanted to see what I can do with it, I could as easily have used the Powershell shell.

Let us now get the SQL Server 2019 image, and I do it by copying the docker pull ...command from the file to the terminal and hit enter. In the terminal you now see something like so (output edited for readability):

After the pull command has finished, we can check what images we have by executing docker images. When I do it on my machine I see this:

We see from Figure 5 how the SQL Server image now exists on the machine.

Cool, we have an image. However, an image is just that, an image, and you cannot interact with it. To relate it to SQL Server, think about the image as an .iso install file. We need to “install” the image, e.g. create and run a container. For this we use the second docker command from Figure 3 above, and it looks like so:

In Code Snippet 3 we see how we use the docker run command to create the container. Let us look at the options:

NOTE: I mentioned above about the -p option that if you run multiple instances you should have different host ports. This is also true if you run a non Docker SQL Server instance on you machine.

After we execute the code in Code Snippet 3 we can check that we have a new container: docker ps:

From what we see in Figure 6, it looks like we are in business! If we want to we can connect into the container and, for example, run a bash shell:

That is all well and good, but what about SQL Server?

Right, so now we have a container, and that container hopefully runs SQL Server. Let us try and connect to the SQL Server via ADS.

So I switch from the Explorer view to Servers: Ctrl + G, and I click New Connection: 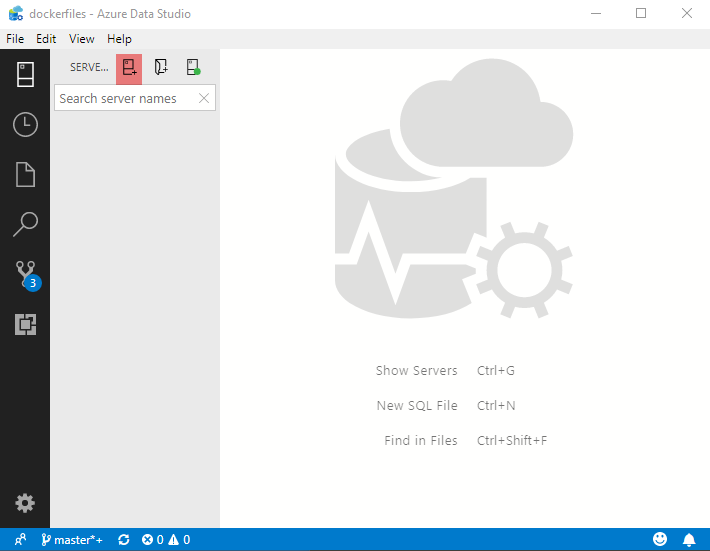 The New Connection is what is highlighted in red in Figure 7, and clicking it I get a connection dialog: 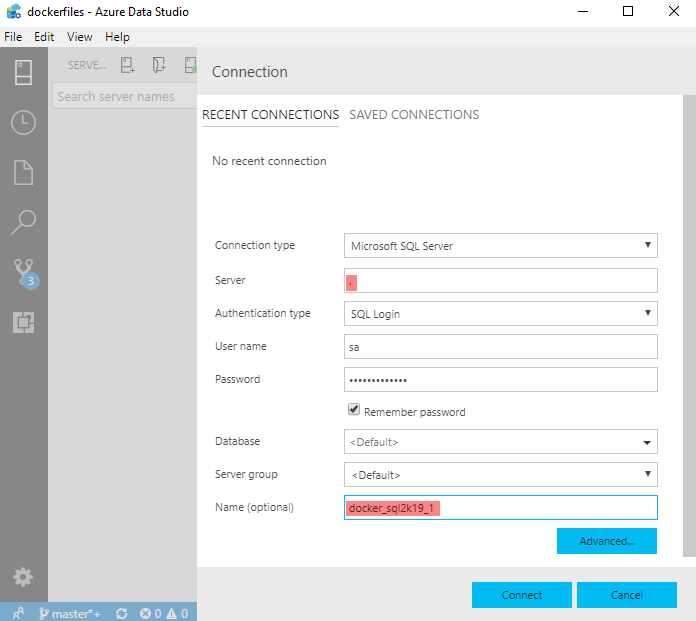 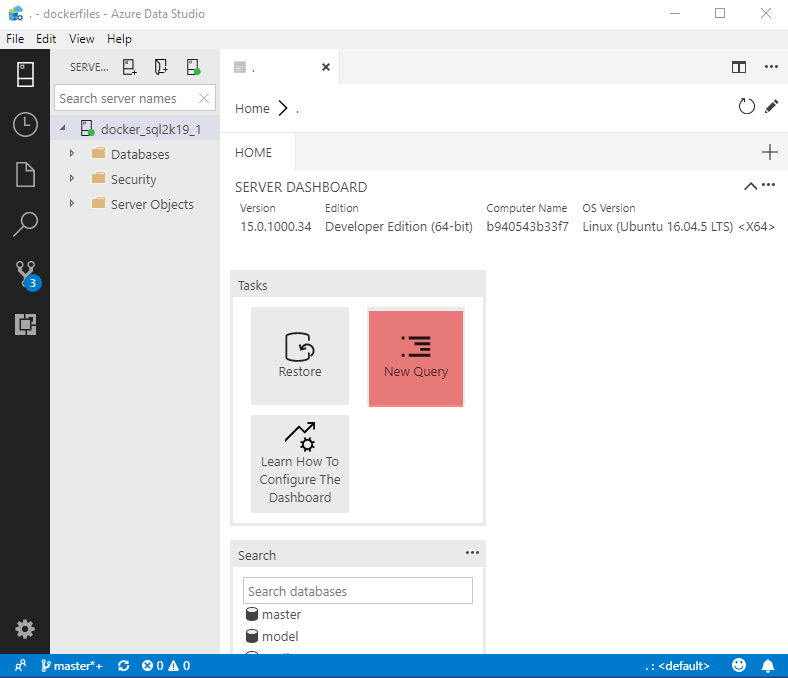 As we see in Figure 9 everything worked, and I am now connected to SQL Server 2019 for Linux, running in Docker container! To further prove all works I click on the “New Query” button (highlighted in red), and I execute a trivial SELECT statement: SELECT * FROM sys.databases: 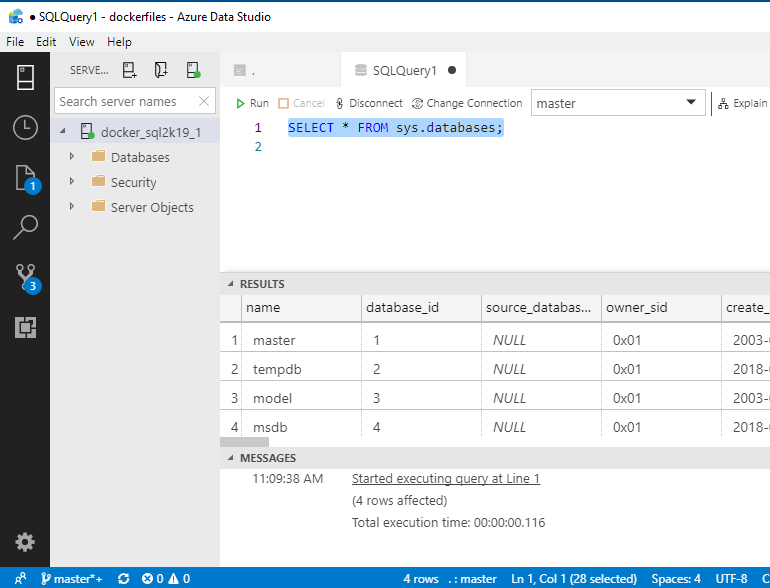 In Figure 10 we see how we get the result back! We can now continue working with SQL Server 2019 for Linux. If you for some reason want to shut down the container you run docker stop <containername> , and to start it up again - surprise, surprise - docker start <containername>.

In this post we covered how we can run SQL Server 2019 for Linux in a Docker container on our Windows machine. We mentioned the Docker commands to use:

In the post I also spoke about Azure Data Studio and some of its new functionality.

In future blog posts I will talk more about SQL Server 2019 for Linux, especially the In-Database analytics and the Java extensions, as well as Azure Data Studio.

To automatically receive more posts like this, please subscribe to my RSS/Atom feed in your feed reader!
What is New in SQL Server 2019 Public Preview Interesting Stuff - Week 39