Just to set things straight, the title of this post has nothing to do with US politics, but the infinitely more important (and exciting) subject of transactions in SQL Server and the concept of doomed transactions. Why I came across the idea for this post was due to a discussion I had with a colleague of mine - Sameer Chunilall - who didn’t agree with my post a while ago about XACT_ABORT, he believes it is a good thing (mostly), where I believe it is a bad thing (mostly).

We discussed at length, and then decided that we both were right. Or rather I decided I was right, and he decided he was right :). Jokes aside, during the discussions the concept of doomed transactions were brought up, and that led me to writing this blog post.

Before we go any further, I have written a couple (three actually) posts that deal with transactions and/or error-handling in SQL Server, so if you want to refresh your memory they can be found here (in chronological order):

Before we start talking about doomed transactions, let’s look at something that has a definitive impact if a transaction will be doomed or not.

NOTE: There is no special demo code for this blog post, if you want you can download the code from the XACT_ABORT blog post, and edit according to the code snippets here.

In SQL Server you execute statements and batches. A statement is what it says it is, a single T-SQL statement, like:

A batch is what is executed at a point in time from an application (SSMS, ADO.NET, etc.):

NOTE: The GO statement in Code Snippet 2, is an SSMS “thing”. When executing code from a script, theGO statement denotes batches.

When executing a stored procedure, that is also a batch. If a procedure calls other procedures, they are all executing inside the same batch. The code below shows 4 procedures we will use going forward:

As we can see, dbo.pr_Caller starts a transaction, calls dbo.pr_1, which in turn calls dbo.pr_2, which finally calls dbo.pr_3. When all is “said and done”, dbo.pr_Caller commits the transaction. The procedure dbo.pr_2 is the “dodgy” procedure in this call chain, and we will use it to simulate some error conditions that will result in various termination types. As you can see in Code Snippet 3, dbo.pr_2 has some commented out code, and it is this code that will cause terminations. Initially we’ll execute the code as is, and this should not cause any errors:

NOTE: The code above starts with TRUNCATE TABLE we do that just to make sure everything is cleaned up before execution. Oh, and BTW - how many batches are executed above? Answer in comments or email.

When executing the above you should see three rows coming back from the SELECT statement, all is good:

Code Snippet 5: Proc Which Will Cause FK Violation

After ALTER:ing the proc and executing as in Code Snippet 4, we get something like:

So we got a FK violation error, but we can also see that we continued the execution in dbo.pr_2, and called dbo.pr_3. Furthermore, the result gives us two rows back, from dbo.pr_1 and dbo_pr_3:

What we just have seen is statement termination. The statement causing an error stopped executing, but we continued executing - even within the same proc - straight after that statement. Furthermore, the error had no negative impact on the transaction. This may or may not be what you expect and want.

I guess that most of you who read this have heard about statement termination before, so what we just have done should not come as any surprise.

Some of the errors that can cause statement termination are:

Scope Termination is probably not as well known as statement termination. A scope termination is when SQL Server terminates the statement that caused the exception and subsequent execution within the same scope. In the examples we are using, scope would be an individual procedure. So, let us have a look at an scope termination example, let us ALTER our “naughty” procedure dbo.pr_2 and comment out the statement which caused the FK violation, and un-comment where the procedure does a SELECT from the non-existent table dbo.tb_MyTable:

When you execute as in Code Snippet 4, the outcome is:

As expected an error happened, but compared to the statement termination example, dbo.pr_2 did not continue executing (we did not see dbo.pr_2: Before EXEC dbo.pr_3). The statement that caused the error was terminated AND all subsequent statements within that scope (procedure). However, the batch continues and dbo.pr_Caller committed the transaction. When you look at the Results tab in SSMS you will see one row returning from the SELECT statement; the insert done by dbo.pr_1.

So, what causes scope termination? I have tried to look into that, but so far the only error type I have found termination the scope is when you try to access a missing object. If you know more types, please email me, and I can update this post.

NOTE: Neither statement termination, nor scope termination have any effect on a transaction.

An interesting aspect of scope termination is how it is being handled (or not) by error handling. From my previous posts about errors, (gotchas, and XACT_ABORT), we see how either IF(@@ERROR <> 0 ), or TRY ... CATCH catch exceptions. How about scope termination errors? You would expect them to be handled the same way as statement termination errors, as they do have the same severity (16), as can be seen from Figure 3, and Figure 4. In fact that is not the case! It turns out that an IF(@@ERROR <> 0) will not catch the error, whereas a TRY ... CATCH block will!

After having covered statement termination and scope termination above, I do think that it is pretty clear what batch termination is. Some code to show this; once again in dbo.pr_2, comment out the SELECT statement against the no existing table and un-comment the part where we try to do a CAST conversion:

Code Snippet 7: Proc Which Will Cause CAST Conversion Error

When executing this (once again a in Code Snippet 4), this is what we get:

When looking at the output as per in Figure 5, we can see that no more execution happened in dbo.pr_2, as was also the case in scope-termination and Figure 4, BUT we do not see any further execution in dbo.pr_Caller either! The batch completely terminated. But wait a second; what about the transaction that was originally started in dbo.pr_Caller? That transaction has been rolled back automatically, when we exited the batch (more about that later).

Errors that can cause batch termination are:

We ALTER dbo.pr_Caller to have a TRY ... CATCH, but we do not do anything other than a PRINT statement. Remember, when we didn’t have any TRY ... CATCH, the transaction was automatically rolled back. It is a little bit different now when we execute it as in Code Snippet 4:

What happened here? All of a sudden we get quite a few error messages, and what is this about Uncommittable transaction at the very end? The short story is that as soon as you introduce TRY ... CATCH and you have active transactions - you need to decide what to do with that transaction.

OK makes sense. In this case, I don’t really care what went wrong, and I want to commit the transaction anyway. I conveniently don’t pay any attention to the part of uncommittable in the error message. After all - this is what I can do if I get a statement termination or scope termination, so why not do it here too! I ALTER the procedure to do COMMIT TRAN in the CATCH block straight after the PRINT statement, and then I execute:

I am in trouble now. This time I am really told that I am doing something wrong: “The current transaction cannot be committed and cannot support operations that write to the log file. Roll back the transaction”. What is this?

NOTE: To further drive home that SQL handles errors on a case by case basis, all errors we have seen so far (caused by statement, scope and batch terminations), have had a severity of 16.

Just to prove that we can recover from a batch termination without errors, we ALTER the dbo.pr_Caller procedure, replace the COMMIT TRAN with ROLLBACK TRAN, and execute. The outcome will be completely different:

As Figure 6 shows, no “nasty” errors - all is OK! So what do we do if we sometimes want to commit the transaction if it is not doomed even if there has been an error, or rather - how can we figure out whether a transaction can be committed or not?

The way to determine if a transaction can be committed or not is to use XACT_STATE(). The XACT_STATE() is a scalar function and it reports on the state of the current transaction. There are 3 possible return values:

To see an example of this ALTER the dbo.pr_Caller proc’s CATCH block to look something like Code Snippet 9 below and then execute. 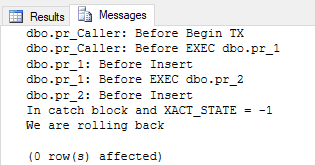 As we see from Figure 7, we ended up in the CATCH block, XACT_STATE was -1, and the transaction was rolled back. You can if you want ALTER the “naughty” proc dbo.pr_2, and comment out the statement causing the batch termination and un-comment the statement which creates the statement termination. When executing, you should now get an output like so: 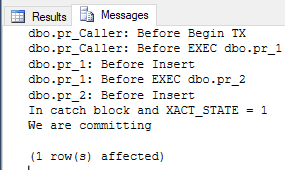 Here we had decided that even if an exception was raised, we wanted to commit the transaction, unless it was doomed.

NOTE: XACT_STATE can be used outside TRY ... CATCH, so you can use it even with “old style” error handling.

I started this blog-post by talking about XACT_ABORT, and how I discussed with Sameer if it was good or bad. We have now come full circle and we are back to XACT_ABORT. You are probably asking yourself how that fits into here?

The answer to that is that if you switch on XACT_ABORT, even statement termination errors will cause the transaction to be doomed! To test this, ALTER the calling proc dbo.pr_Caller and insert a SET XACT ABORT ON at the beginning of the proc, underneath the SET NOCOUNT ON. The first few lines of the proc should look like so:

If you haven’t already ALTER:ed dbo.pr_2 to cause a foreign key exception (statement termination and not a “doomable” error), do so - as discussed between Figure 7 and Figure 8. When you now execute you will get the same output as in Figure 7.

Finally, it is quite common to hear that triggers can be an issue, as they are rolling back transactions if an error happens in the trigger. The reason for this is that when a trigger executes, it automatically sets XACT_ABORT ON.

I am not completely certain of the reason for this, but I guess it is a good “defensive” measure. So, if you don’t want this behavior, you can do a SET XACT_ABORT OFF in your triggers.

Exception handling in SQL Server is NOT straight forward, especially when mixed with transactions!