This post is the 24:th post about Microsoft SQL Server R Services, and the third that covers sp_execute_external_script. I have thought many times that this series has reached its end, and I have many times realised I was wrong. Well, now I can say that this is the last post in the series! I started over a year ago (March 4 2017) with an idea about “wouldn’t it be cool if I wrote a couple of posts about Microsoft SQL Server R Services”! Over one year and 24 posts later, here we are!

NOTE: This post has similarities with the Microsoft SQL Server R Services - Internals V post, where I also discussed parallel execution. In that post however I concentrated more on the internal workings , whereas I in this post will not go that deep. In this post I also cover a couple of more things than just the @parallel parameter.

In the two last posts in this series we discussed sp_execute_external_script and the parameters the procedure expects/takes:

In Code Snippet 1 we see all parameters for sp_execute_external_script, and here is what we have covered so far:

In sp_execute_external_script - I we discussed:

All of the above parameter values have to be of the NVARCHAR data type.

The next post sp_execute_external_script - II covered @params and @parameter1:

So, now there is one parameter which we have not talked about: @parallel, and - as I mentioned above - that is the topic of this post.

To help us figure out the things we want, we use Process Monitor, and Process Explorer:

In this post, we do not use the same database and database objects as we have in last few posts, but something from quite a while back, for example Microsoft SQL Server R Services - Internals V:

The last thing we need to do before we get started in earnest is to create some models which we later use when we talk about the topics for this post. What we want to do with is to create linear regression models, where - ultimately - we want to predict the value of y in dbo.tb_Rand_3M. We believe y is related to rand1, rand2, rand3, rand4 and rand5 and that is the bases for the prediction. In reality, there is no relation as such, but in this case, it does not matter - we just want to “play” with some data. We create two models, one using CRANR and one using RevoScaleR functionality, which we then persist to the dbo.tb_Model table above:

As I said above, the code in Code Snippet 3 creates two models, one using “traditional” glm, and one rxLinMod from RevoScaleR. We persist the two models to the dbo.tb_Model table with a name, so we can retrieve them when we want to run predictions.

Now then, let us start. However, before we look into parallel processing and the @parallel parameter and all the other “cool stuff” let us recap what we have talked about in previous posts.

In quite a few posts we have discussed how the launchpad service creates multiple RTerm processes when we execute sp_execute_external_script, and by default one of those processes executes the work. We can see the behaviour if we execute following code:

In Code Snippet 4 we see how we, to begin with, retrieve the binary representation of the persisted model and use it as a parameter passed into the script. In the script, we first deserialise the binary model passed in, and from there we use it to predict y, based on the input data. The data passed in is the dataset we SELECT in @input_data_1, and the prediction function we use is the RevoScaleR rxPredict function. Finally, the predicted values come back in the OutputDataSet. Oh, the Sys.sleep at the first line of the script is so we, when we use Process Explorer, more easily can see what is happening. The part of the script with the cat statements is also to make what we see clearer.

NOTE: In future posts, outside of this series, the plan is to talk more about RevoScaleR functions.

When we execute the code, a resultset comes back and a print of the cat statements as below:

We see in Figure 1 the process id of the RTerm the script ran in, and the number of rows that the external engine processed. Now let us check with Process Explorer what happens when we execute the same code:

While the code is executing, look under the Launchpad.exe process in Process Explorer and you see something like so: 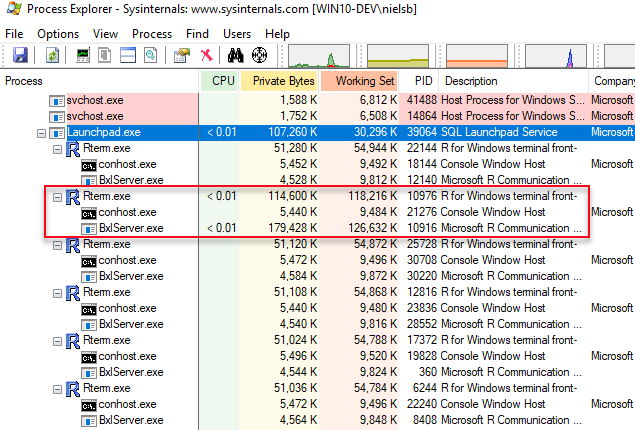 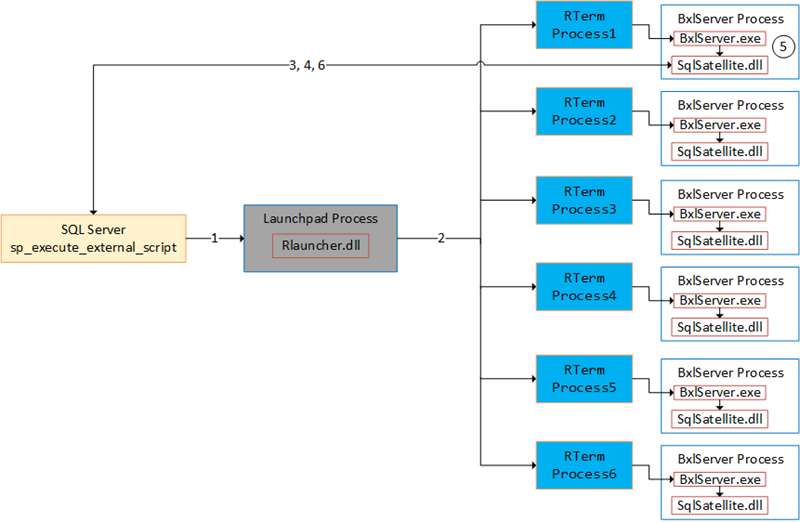 In Figure 3 we see what happens when we execute sp_execute_external_script and the numbers in the figure stands for:

Let us now look at parallel execution. When you read documentation about SQL Server R Services it always mentions how efficient it is to execute external scripts as one can utilise SQL’s parallelism. How does this work then? In “normal” SQL Server parallelism, SQL Server decides whether to execute a statement in parallel or not, and the MAXDOP setting defines the number of processors executing the statement.

The @parallel = 1 probably does not need any explanation - we want to run in parallel, but the OPTION(querytraceon 8649, MAXDOP 4) may need some clarification. When I researched the code for this post I had problems with getting a parallel query plan, so I try to force parallelism by setting the query trace flag 8649 explicitly. When using @parallel = 1 you must specify a WITH RESULT SETS clause with output schema, regardless if you actually return a resultset or not.

So let us now see what it looks like when we execute the code in Code Snippet 5. For this we use Process Explorer in the same way as we used it above:

Execute the code in Code Snippet 5, and while it executes look under the Launchpad.exe and see if it is different from above: 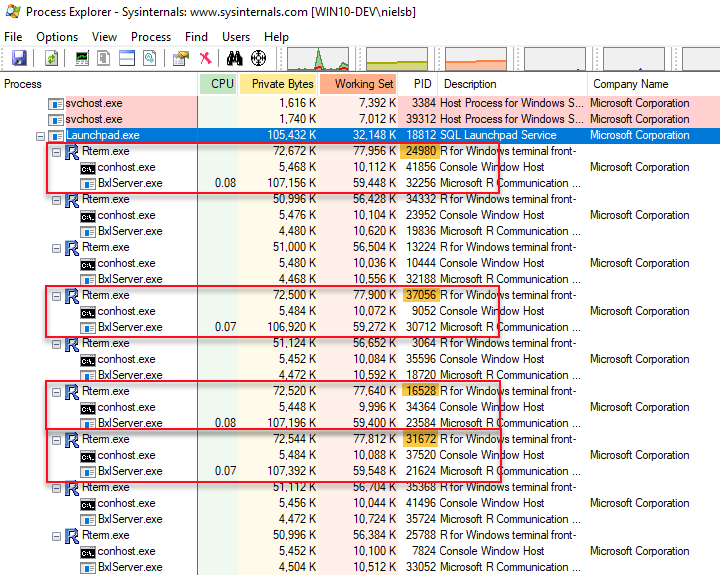 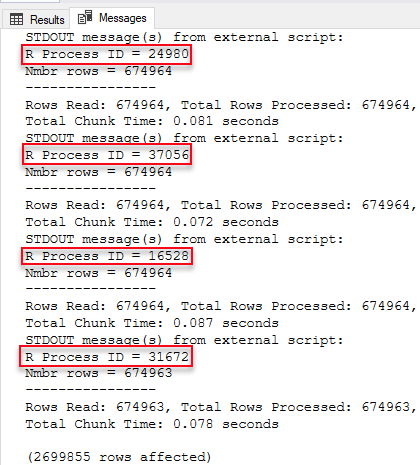 So Figure 5 shows that we ran the rxPredict function in parallel using 4 processes, and the reason for 4 processes was the MAXDOP setting (4). So how does this work then, is there a coordinator somewhere distributing the work, or what? Let us try and figure that out, and to help us we use Process Monitor (for now we can exit Process Explorer).

To see what happens, execute the code in Code Snippet 5 and watch the output from Process Monitor:

Notice, in Figure 6, how there are four connections, and when we look in the Path column we see how the connections are all made to port 52245 from ports: 53318, 53319, 53320 and 53321. Port 52245 is SQL Server, and the other ports are SqlSatellite. OK, so four connections are made up front, what about sending data to the SqlSatellite? Change the filter, instead of “TCP Connect”, to filter on “TCP Receive”, e.g. what the SqlSatellite(s) receives. Execute the code in Code Snippet 5 again and see what Process Monitor outputs:

Wow, that was many events! In Figure 7 we see the 12 first packets and how they sit in 4 groups for 4 distinct port numbers. The packets we see are the packets we discussed in quite a few posts, Internals X, XI and XII amongst them, and the packets are the authentication packets SQL Server sends to the SqlSatellite and the packet containing the external script. So it looks like 4 SqlSatellites receives the same setup and script packets. When we scroll further down in the output we see how SQL Server sends input-data packets to the SqlSatellites:

For data that comes back to SQL Server, the flow is the same; each SqlSatellite sends back “its” own data, and the figure below illustrates the full flow: 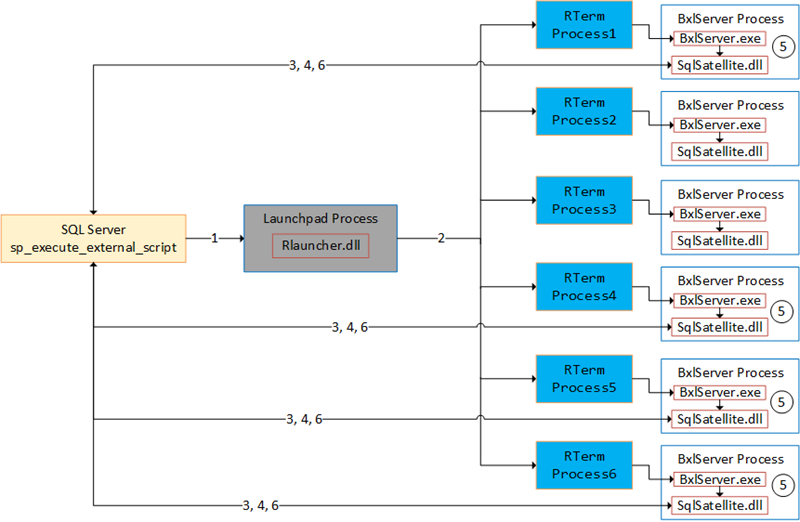 Figure 9 tries to illustrate executing external script in parallel, and the numbers in the figure are the same as for Figure 3:

So to answer the question about if there is a coordinator somewhere; SQL Server is the coordinator, and SQL Server sends data to the various SqlSatellites and the hosting BxlServer processes. It is important to note how the SqlSatellite and BxlServer processes, processes the data independently, which means that you do not want to do parallel execution through @parallel = 1 if your data has dependencies between different rows, like creating models. Later in this post we cover how you can execute in parallel even if you have dependencies between rows.

Sometimes you are in a situation where you need to process more data than fits into memory, and this can especially be true when you use CRANR functions which are not optimised to handle large datasets. That is where streaming of data comes in handy and the @r_rowsPerRead parameter. The @r_rowsPerRead parameter is not part of the signature of sp_execute_external_script, but it is still a valid parameter. It allows you to control the number of rows passed during streaming, by specifying an integer value for the parameter and adding the parameter to the @params collection:

The code in Code Snippet 6 is similar to Code Snippet 5, however in Code Snippet 6 we use the CRANR predict function, and we also stream the data by defining the @r_rowsPerRead parameter and setting it to 250. The output after we execute the code looks like so: 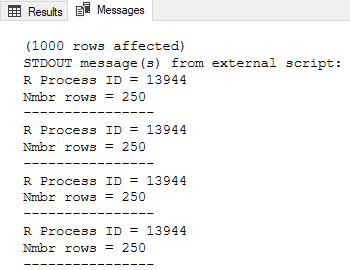 The output from SSMS, which we see in Figure 10, shows how 250 rows have been processed four times by the same process id. What about streaming and parallel processing? Sure, that works as well, but I do not cover it in this post. OK, so how does the streaming work then, does SQL Server send batches of data to the SqlSatellite(s) as we saw when we executed in parallel? Let us try to find out, and we start with changing the code a little bit to make it simpler:

As you see in Code Snippet 7 we no longer use a model, and we have also “scrapped” @r_rowsPerRead. In essence, the code looks like most of the code used throughout this series. When we use Process Monitor with the same filter as above, the output looks like this when we execute the code in Code Snippet 7:

Look at the highlighted rows in Figure 11:

Compare what you see above with the output for code like so:

In Code Snippet 8 we add the @r_rowsPerRead parameter, and we set it to 25: stream 25 rows at a time. You see how we also have a Sys.sleep(10) in the script. That is to make what happens more transparent. Execute the code and watch the output from Process Monitor: 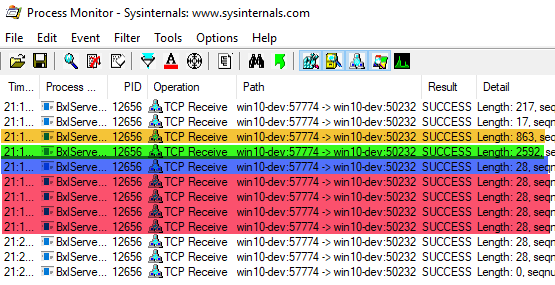 Oh, that is interesting! In Figure 12 we now see how the three first highlighted packets are the same as in Figure 11, highlighted in yellow, green and blue. The only slight difference is the script packet, where the packet in Figure 12 is somewhat bigger. The reason for the packet being bigger in Figure 12 is that the @r_rowsPerRead parameter is part of the script packet. What we see makes it clear that SQL Server sends the whole resultset packet (green) to the SqlSatellite in one go, and the streaming is not because of batching from SQL Server. The streaming is due to SqlSatellite receiving an end of resultset packet (red), and when it receives the packet, it streams in the number of rows as per the @r_rowsPerRead parameter.

UPDATE: Originally I covered the SQL Server Compute Context in this post. However, it turns out that; how I thought things worked was not necessarily true, so I wrote the post sp_execute_external_script and SQL Compute Context - I, to try and correct my mistakes. So if you are interested in how the SQL Server compute context works from sp_execute_external_script go over and have a look.

In this, the last post in the [Microsoft SQL Server R Services series we discussed:

If you have comments, questions etc., please comment on this post or ping me. As mentioned, this is the last post in this series: I have had a lot of fun writing this and I have learned a lot. Hope you - my readers - have enjoyed it as well!