This post is the second post in a series about SQL Server 2019 Extensibility Framework and the Java language extensions. In the first post, SQL Server 2019 Extensibility Framework & Java - Hello World, we looked at how to install and enable the Java language extensions, and we also wrote some pretty basic Java code to ensure it all worked.

In this post we look at how we can pass data back and forth between SQL Server and Java.

Let us just look back and refresh our memories about what we discussed in the previous post.

So, when the Java extensions are enabled we can write and execute Java code:

Based on the points above we saw some Java code looking like so:

In Code Snippet 1 we see the required numberOfOutputCols class member, together with class members for the two parameters used in the adder method. We also see that we do not pass back the result of the adder method as there is no support for output parameters (in this post we cover how we can pass data back to SQL).

We call the code in Code Snippet 1 from SQL like so:

So, that was what we discussed in the previous post. Towards the end of this post, we revisit the code above.

In today’s post, we use some data from the database, so let us set up the necessary database, tables, and load data into the tables:

We see from Code Snippet 3 how we:

We start by looking at how we pass data when we use R/Python in SQL Server Machine Learning Services. In Microsoft SQL Server R Services: sp_execute_external_script - I I discussed, among other things, how we use named parameters to refer to data pushed into the external engine from SQL Server as well as data returned to SQL Server.

The parameter’s default names are InputDataSet and OutputDataSet, and a simple example looks like so:

Code Snippet 4: Passing Data In and Out

The Python code in Code Snippet 4 pushes data into the Python engine via InputDataSet, and OutputDataSet echoes the data back to SQL Server. Why this works is because R/Python are aware of these parameters, thanks to “helper” components, (SqlSatellite.dll and friends), shipped together and “baked” into R/Python. In essence, there is a very tight integration with the external runtime which makes this possible.

In Java, there are also helper components, (a topic for future posts), but the integration is not as tight, so when we want to pass data into and out of Java we need to code somewhat more explicit to make data passing possible.

When pushing data into Java and using that data, we need to define two public static class members:

The calling components populate the variables for input data automatically, and you just need to initialize the arrays with a size greater than 0. Let us look at an example based on the SELECT statement in Code Snippet 4, where we want to push data into Java:

In Code Snippet 5 we see how we:

In the foo method we loop the three input arrays and print them out. We see that we do not have to populate the arrays as something else, (some component), does that for us. To make the code callable from SQL Server we:

With the .class file in the CLASSPATH location we call it from SQL Server:

The code in Code Snippet 6 follows what we discussed in SQL Server 2019 Extensibility Framework & Java - Hello World, and the summary section above. When we execute it we see this: 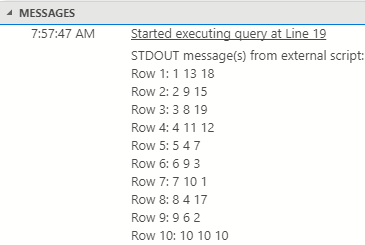 In Figure 1 we see the result of the printf statement in Code Snippet 5. Printing data to the console is probably not what we want to do in a “proper” application, so let us see how we can return data from Java back to SQL.

When returning data from our Java method(s), we use column array class members, similar to the ones we use when passing data into Java:

There are a couple of differences between the variables used for input data and the above output variables:

So, if we wanted to have a method, bar, “echoing” back the input dataset, similar to what we see in *Code Snippet, 4 the code looks like so:

In Code Snippet 7 we see how I:

After I have compiled the code and moved the .class file to the CLASSPATH location, I execute as in Code Snippet 6, but with one difference: the @script parameter now points to the bar method: @script = N'DataPassing.bar': 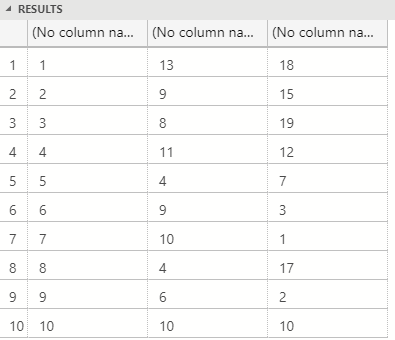 Cool, we have now seen how we pass datasets in and out of Java and how we use the different class arrays. Actually, that is not entirely true; we have not discussed the null map variables at all, other than saying what they are and that they need to be instantiated. We answer the questions about how and why to use them in the next post.

In the previous post, (and in the recap above), we said that Java methods we use from SQL Server cannot have parameters and they must be void. In the recap section, we saw how we tried to work around those restrictions by having class member variables, etc.

With what we now know, we can re-write the Java code to something like so:

In this new code we see in Code Snippet 8 we:

The SQL code to call into this Java code looks like so:

The result returned when we execute the code in Code Snippet 9 is as follows:

In this section, we saw how we can work around, (somewhat), the restrictions that exist at the moment when calling Java code from SQL Server.

In this post, we looked at how we pass data back and forth between SQL Server and Java. In the Java extensions we do not have the InputDataSet, and OutputDataSet variables, so we need to define class member arrays for the columns we send in and pass back out, as well as a variable indicating the number of columns we return:

In the next post we discuss more about the null map variables.