This post covers those changes as well as discusses what SQL Server Extensibility Framework and Language Extensions are.

Before we “dive” into the “nitty-gritty” let look at the data we use in this post.

The data we see here is for you who want to “code along”. It is lifted from the post mentioned above:

We see from Code Snippet 1 how we create a database where we want to run some Java code from.

In SQL Server 2016, Microsoft introduced SQL Server R Services. That allowed you to, from inside SQL Server, call to the R engine via a special procedure, sp_execute_external_script, and execute R scripts. The R engine was, (and is), part of the SQL server installation but it runs as an external process, (not in SQL Server’s process), and subsequently, R is seen as an external language.

The communication between SQL Server and the external engine goes over the Launchpad service:

The above is a very high-level overview of how it works, and you can read more about the inner workings of it in SQL Server R Services.

So, a launcher dll is a piece of code, typically written in C++, who knows how to interact with the external engine.

At the time of SQL Server 2017 and the inclusion of Python, the extensibility framework was more just a name or - at least - it was purely some internal Microsoft SQL Server code. It was nothing that you and I could use directly. Then came SQL Server 2019.

NOTE: There are most likely quite substantial differences between the javaextension.dll and the R/Python launcher dll’s, but in his post, I treat them as being more or less equivalent.

However, Microsoft did not “hack” the Launchpad service, but what they did was, with the view to “properly” expose an extensibility framework with multiple external languages, that they introduced some new components (hosts). The Launchpad service calls these hosts for all languages except R/Python. Yes, yes, I do know that for now (we are now at CTP 3.0), it is only Java, but…

NOTE: In future posts I will talk more about these new components.

Having read this far in the post you may say: Hey Niels, this is all interesting and all, but you have not said anything we don’t already know.

Ok, so let us see what this is all about. Remember how we, in the Java & SQL Server 2019 Extensibility Framework: The Sequel post, discussed how SQL Server CTP 2.5 introduced a Java SDK, mssql-java-lang-extension.jar, that we as developers need to develop against when we write Java code we want to execute from SQL Server. That is a requirement in CTP 3.0 as well, but the way you get the .jar file is different. In CTP 2.5 you downloaded the file, whereas in CTP 3.0 the file is part of the SQL Server distribution, and you find it at: ..\<path_to_sql_instance>\MSSQL\Binn\mssql-java-lang-extension.jar.

We know from the post mentioned above that we need to create an external library based on the .jar file, so I copy the file to a more accessible location and then:

The exception we see in Figure 2 is due to one of the changes in CTP 3.0: an external language needs to be “registered” with SQL Server before we can reference it. Registering a language with SQL Server allows Microsoft and/or 3rd parties to expose arbitrary languages to be used from SQL Server.

What we register is the actual language extension file for that particular language, together with a name for the language.

The above is a somewhat simplified explanation of the arguments, but it should be enough for us to get started. You find a more in-depth description here.

Let us look at what we see if we run a SELECT against those two catalog views. I do this on a freshly installed CTP 3.0 where I have not created any external languages. I have only enabled Machine Learning Services together with R and Python. When I execute my SELECT’s, I see:

What I see in Figure 3 surprises me somewhat; even though I have not created any external languages myself, the mere fact that I have enabled Machine Learning Services bootstraps two languages: R and Python, as we see in the upper result grid, (SELECT * FROM sys.external_languages). Notice also how in the lower result grid, (SELECT * FROM sys.external_language_files), I see files for both the Windows as well as the Linux platforms.

So let us create Java as an external language. We know from above that the Java language extension file is the javaextension.dll, which is part of the SQL Server distribution and you find it in the same directory as the SDK .jar mentioned above: ..\<path_to_sql_instance>\MSSQL\Binn\javaextension.dll. However, you cannot use it directly in the CREATE EXTERNAL LIBRARY call; you need to archive it into a .zip file first - as mentioned above.

I zipped the dll and placed it in the same location as the .jar file in Code Snippet 2 and I am now ready to create the external language:

Sure enough, when looking at ..\<path_to_sql_instance>\MSSQL I see an ExternalLanguages directory, and as with external libraries, it is empty. Remember from the posts mentioned above, how the ExternalLibraries directory got populated when we resolved an external library. Let us see if it is the same for external languages.

As we have created the external language, we can now do what we tried to do earlier; create the external SDK library. So, we run the code in Code Snippet 2 again, and now it succeeds. We verify that by executing: SELECT * FROM sys.external_libraries. When we have deployed the SDK, we can deploy our Java code that we want to call from inside SQL Server. In this post, I use the same Java code as in the first example in Java & SQL Server 2019 Extensibility Framework: The Sequel:

I compile the code in Code Snippet 5 into a .jar file which I then deploy:

We see after we ran the code in Code Snippet 6 that nothing changed in the ExternalLanguage directory, and nothing changed for that matter in ExternalLibraries either. Hopefully, we see some changes when we execute the code calling into our class:

The result after running the code in Code Snippet 7:

As we see in Figure 5, the code we ran in Code Snippet 7 executed successfully. So, what has happened in the file system: 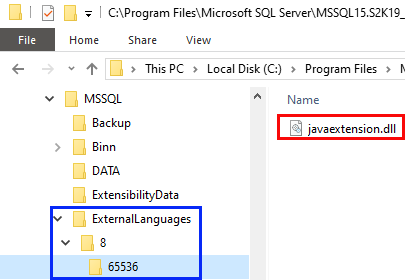 In Figure 6 we see how, when executing the code in Code Snippet 7, the language extension file gets copied to a directory with the structure ExternalLanguage | Database Id | External Language Id | File Name. As with external libraries, SQL Server loads the extension from that directory.

In this post, we discussed the requirement in SQL Server CTP 3.0 to register any external language other than R/Python which you want to use from inside SQL Server.

NOTE: At the time of writing this post the only external language besides R/Python is Java, but other languages will most definitely become available.

So, what did we say:

Something we didn’t touch upon in this post was that the security model for executing against an external language has changed somewhat. We cover that in a future post.