In the previous internals post we looked at what happens inside the SQL Server engine when we execute sp_execute_external_script. In that post we wrapped up when we reached the launchpad service (Launchpad.exe). This post will look closer at the launchpad service, and we will do it by some more “spelunking”

In both previous posts about SQL Server R Services I have mentioned that the launchpad service is responsible for launching an external runtime when we execute sp_execute_external_script. In the Internals I post the following picture showed what happened inside the SQL server engine when executing the procedure:

From Figure 1 we see how an named pipe connection is opened from the SQL Server engine into the launchpad service, and eventually the routine sqllang!CSQLSatelliteConnection::WriteMessage writes a message to the service. The message will at one stage or another cause the launchpad!CLaunchContext::Launch routine in the launchpad service to be called. In a little while we’ll see how we came to that conclusion.

Launchpad is a new service installed together with SQL Server 2016, and it is there to support execution of scripts targeting external runtimes/engines. The launchpad service calls into launchers, and it is the launcher’s job to launch the correct runtime/engine. How does the launchpad service know what launcher dll to call into? To answer that, cast your mind back to the previous post about internals, in that post we looked at the procedure used to execute external scripts: sp_execute_external_script, and we executed some code like so:

Looking at the code in Code Snippet 1 we see the first parameter being the @language parameter, and it is this parameter that tells the launchpad service to use (in this case) the launcher for R. 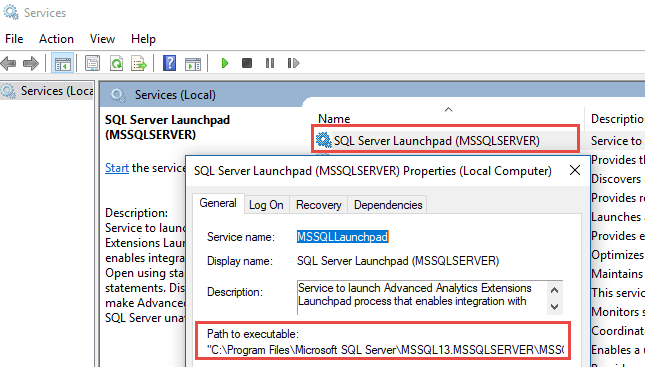 If we look at the Path to executable setting under the General as in Figure 2 tab we may get some more insight:

After having copied the value in Path to executable we see is shown in Code Snippet 2. And in there we can see a command line argument -launcher with a value of RLauncher.dll. If we search for a file named RLauncher.dll we find it in the Binn directory together with all other SQL Server files:

So, a theory is that during startup, the launchpad service reads in the value of the -launcher argument, and perhaps even loads the dll. Is there any way we can prove that theory? We can try:

You should now see a couple of new files in the log directory, and when you open them you can see how there are log messages about RLauncher.dll. If you have Process Explorer installed you can also verify that RLauncher.dll is loaded by finding the launchpad service process and then look at dll’s as in Figure 4 below: 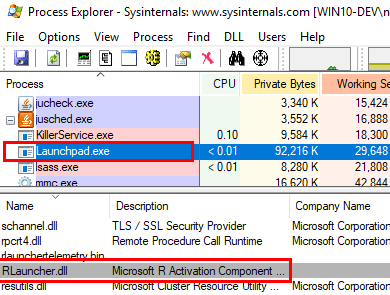 Before we start “spelunking” with WinDbg, let’s look at the arguments used by the launchpad service (as seen in Code Snippet 2) and see what they mean:

Some of the arguments (most in fact) I found in what I copied from the properties dialog for the service and the field Path to executable mentioned above. However a couple of the arguments were found by, from command prompt, trying to run the launchpad executable like so: C:\<path_to_sql_server_instance>\MSSQL\Binn>launchpad.exe without any arguments. That resulted in an error and some help how to run the launchpad service.

What was interesting in that, was that it - apart from listing the arguments above - also gave an example:

Notice how in Code Snippet 3 above, multiple launchers are defined, and a launcher for Python being one of them. Maybe we’ll soon see Python being supported as well!

When named pipes are used, the client connects to a certain named pipe through the ConnectNamedPipe routine. Let’s do some “spelunking” in the launchpad service using WinDbg, and see if we can find anything that can have anything to do with named pipes:

NOTE: The internals - I post has more information how to attach to a process, and what commands to use.

Figure 5 shows the result after the search, and the KERNELBASE!ConnectNamedPipe routine looks promising. To find out what happens, we’ll:

In the debugger attached to the launchpad service we set a breakpoint at ConnectNamedPipe: bp KERNELBASE!ConnectNamedPipe. We then execute the code in Code Snippet 1 and see what happens:

The call-stack at this point looks something like so (call stack output by k c):

So that is how SQL Server connects into the launchpad service:

NOTE: The above is very simplified, in fact a lot of things happen in parallel, and we’ll touch upon that a bit later.

Let us now go on and have a look what happens after the connection has been made. How do we go about finding out what happens? Well, we can do it the “brute force” way:

We know that the launcher for R will try and load the R runtime, and if we look in the MSSQL\Binn folder where the RLauncher.dll resides we find a config file for the launcher: rlauncher.config. Let’s see what it contains:

In Figure 5 we see that the configuration file for the launcher contains the RHOME path. With that in mind we can assume that the launcher will call into there and launch the runtime. What happens if the launcher cannot find the path? An exception would probably be thrown, and if we were debugging we could hopefully catch it and have a look at the stack. To test this theory:

The restart should just go fine, and you can now attach WinDbg to the launchpad process:

When the debugger runs, you execute the code in Code Snippet 1, and you get an ugly error in management studio:

Yeah, kind of obvious that the runtime for R cannot be launched as it is nowhere to be found. WinDbg also reports some exceptions but the debugger is still running. When looking at the exceptions you see something like so:

In Code Snippet 5 we see that the launcher tries and create a process for RTerm.exe which is the entry-point to the R runtime. So the question is what was being called to get to this point. If you break out of the debugger and under the Debug menu choose Event Filters: 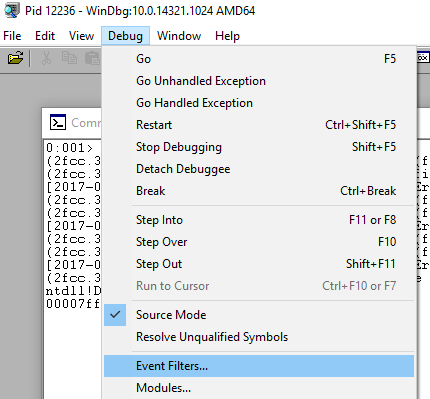 In there you can choose how certain events are handled. In Code Snippet 5 we see that the exception we encounter is a C++ EH exception, so in the Event Filters dialog you can set how that particular exception should be handled. We want it to be enabled, but not handled: 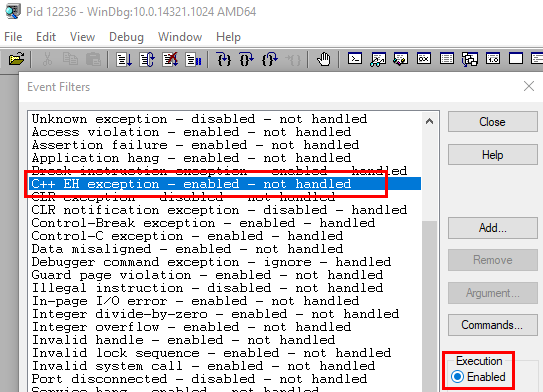 When you execute the code again after having enabled the exception as in Figure 8, the debugger will now break at the exception, and you can view the call-stack through the k command. In Code Snippet 6 below I show an abbreviated part of the call-stack:

In Code Snippet 6 we see the launchpad!CLaunchContext::Launch routine, the same we identified in the internals I post. That routine has an important part to play when calling into the launcher. When you look at Code Snippet 5 you also see routines from the RLauncher module. Unfortunately we cannot really see what goes on inside the launcher as there is no symbol file for it.

Seeing that we don’t have symbol files for the RLauncher module we have to “hunt” around in WinDbg as well as making some assumptions of what is happening if we want to go further in the “spelunking”. When we, in Code Snippet 5 looked at the exception we received in the debugger we saw something about CreateProcess, and we already saw the Launch routine in Code Snippet 6. What if we were to look for something like that in the launchpad module: x launchpad!*Launch*Process*. That reveals:

To confirm this we can copy back the R_SERVICES directory to where it is supposed to be, and while still having a breakpoint at launchpad!PhysicalUserContext::LaunchProcess execute the code again. When you hit the breakpoint, go to process explorer and have a look at running processes where the process is named something with R. On my machine it looks something like so: 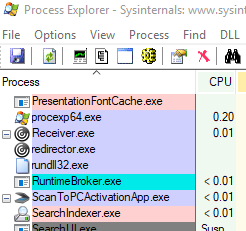 After having continued the debugger, it looks like so: 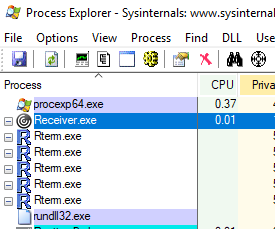 In Figure 10 we now see how some instances of RTerm.exe has been spun up. In next post we’ll look at why there are multiple instances.

UPDATE: After “spelunking” for the Microsoft SQL Server R Services - Internals III post (still in the works), I realized that I over-simplified the above, so I have tried to make it somewhat more clearer below.

Though it is correct to say that the actual launch of R happens in the launchpad!PhysicalUserContext::LaunchProcess, it is more to it than that. If we were to set a breakpoint at launchpad!CLaunchContext::Launch, and when we reach that breakpoint we would do “Watch and Trace” (wt), we would get a very lengthy trace, containing all calls being made.

NOTE: Some routines (launchpad!PhysicalUserContext::LaunchProcess amongst them) may be too long for the WinDbg console, so wt can also be written to a log-file, using WinDbg menu Edit | Open/Close Log File.

During my “spelunking” I did a wt against launchpad!PhysicalUserContext::LaunchProcess, which resulted in a 7Mb file. When scrolling through the log-file, the following (extremely abbreviated) call-stack could be seen:

Setting breakpoints and stepping through the code I saw how the R process (RTerm.exe) was spun up inside the KERNELBASE!CreateProcessInternalW routine.

If we were to step through the routine we’d see it looks quite like the sqllang!CSQLSatelliteConnection::WriteMessage which we looked at in the internals I post. Having reached this point we can now with somewhat certainty assume that after we have launched the process, the launchpad service sends the actual data packet to the R engine through the launchpad!CSQLSatelliteConnection::WriteMessage routine. And this is where we leave it for now.

We should now have a somewhat better understanding of what happens when the launchpad service is called from SQL Server. In Figure 11 below shows some of the significant events/calls when sp_execute_external_script is executed: 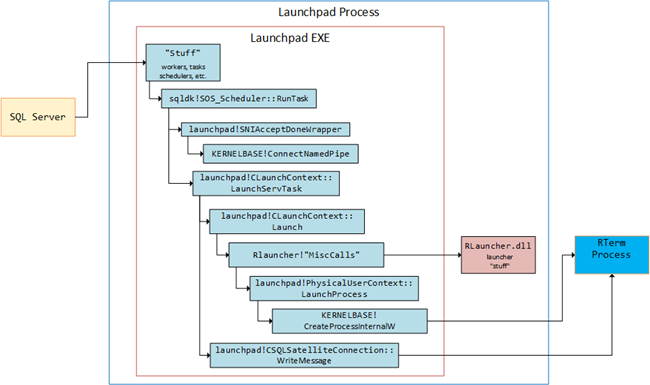 Some of the above are, somewhat, educated guesswork since I don’t have the symbol file for RLauncher.dll. I do however believe it is more or less accurate. In the next internals post we’ll look at what happens in the RTerm process.