So far in this series we have been looking at what happens in SQL Server as well as the launchpad service when we execute sp_execute_external_script, and we have still no real “clue” to where the R engine comes into play.

Well, hopefully that will change (at least a little bit) with this post, as we here will look at what happens when we leave the launchpad service.

Before we dive into the “juicy” stuff, let’s remind ourselves where we are.

Normally in the recaps in this series, we have looked at what was covered in the previous “episode”. In this recap, let’s look at he “full” picture up until now. 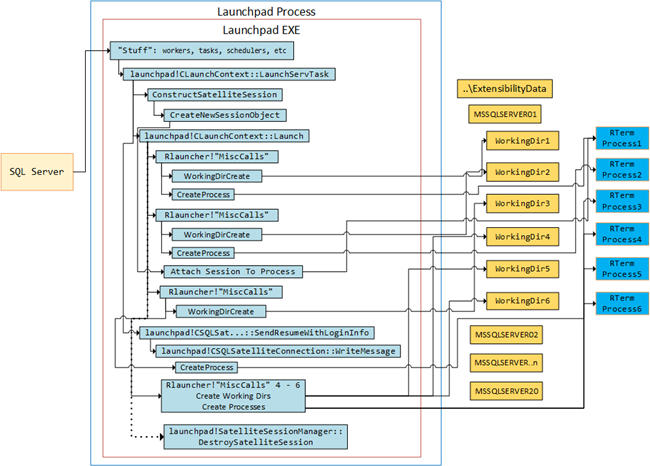 We discussed how the number of processes can be controlled by the PROCESS_POOL_SQLSATELLITE_GROWTH setting in rlauncher.config file, and how it defaults to 5 if nothing is set. 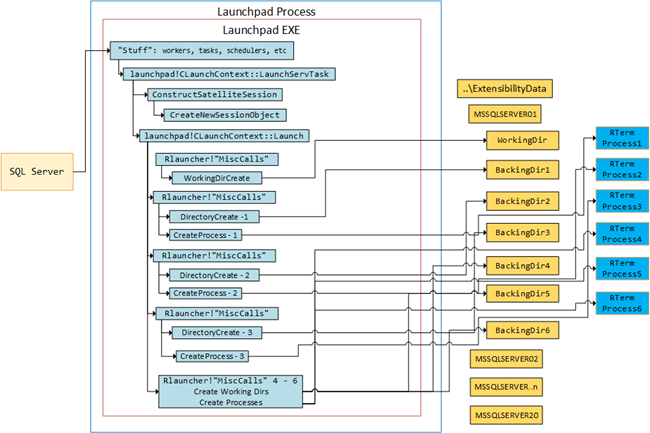 While we were investigating the directories created in Internals - VI we saw that, while we executed an external script, files and sub-directories were created in the various backing directories:

In Figure 4 we see he content of the directory which is the processing directory, and in Internals - VII we looked into what creates those files/directories and what they are for. We came to the conclusion that both the launchpad service (probably through the rlauncher.dll) created some files, whereas Rterm.exe created others.

That’s where we are, and now it is time to look at the world outside of the launchpad, and try to figure out what is being used when executing an external script.

To answer that let us first look at what the R “engine” really is, and let’s do that by looking at standard CRAN R, and for this I use RStudio as an IDE. So, let’s open RStudio and make sure it uses the CRAN R engine:

At that stage if I check in Process Explorer to see what processes are loaded I see something like this:

So in Figure 6 we see how the rstudio.exe is host for rsession.exe, which in turn host conhost.exe. For this discussion conhost.exe has no real impact, but if you want to know more about it, here is a good article explaining why we have conhost.exe.

Going back to rsession.exe; in Process Explorer, we look at what dll’s it has loaded (click on ``rsession.exe` followed by Ctrl-D ) we’ll see something like this:

Figure 7 above shows 7 dll’s loaded by rsession.exe, and what is interesting is the second from bottom, which has a path pointing to the R libraries. When we look further down in the list we’ll see more dll’s from the R libraries:

Among the dll’s we see the R.dll, which is the main dll for R. So, it seems that rsession.exe acts as a host for the R engine, and the R engine is a “bunch” of dll’s.

Coming back to rterm.exe and what it is, we can now assume it acts in the same way as rsession.exe. Let us go back to the code that we used in Internals - III when we captured the figure we above in Figure 1:

Like we did in Internals - III, we’ll execute the code in Code Snippet 1, and while the code is running we’ll look in Process Explorer and see if we find anything of interest:

Let’s look a bit closer at what dll’s we find for one of the active Rterm processes, click on the Rterm process which has a CPU value, and then click Ctrl-D.

NOTE: You may have to re-execute the code in Code Snippet 1, maybe even increase the sleep time to 3 or 4 minutes to be able to see everything.

When I scroll down in the dll list I see some familiar R dll’s, that we also saw in Figure 8:

At this stage we can safely say that the Rterm.exe and its process hosts the R engine. That is cool (yeah I know - I need to get a life), but what does that BxlServer.exe do in the mix?

So the question was, what is the BxlServer.exe? To answer that let’s take a step back, and look at the R offerings Microsoft has:

Let’s see what happens if we pointed RStudio towards the Microsoft R Open environment: 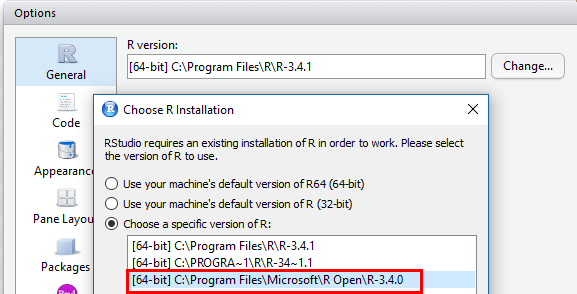 In Process Explorer, looking at the rstudio process, it won’t look any different than what it did when Rstudio targeted CRAN R as in Figure 6, so obviously the Microsoft R Open offering does not “know” of the BxlServer.exe we see in Figure 9. But, looking at the dll’s loaded by rsession.exe, we see more or less the same as was loaded by rterm.exe in Figure 10:

What would happen if RStudio targeted the Microsoft R Server (MRS) instead: 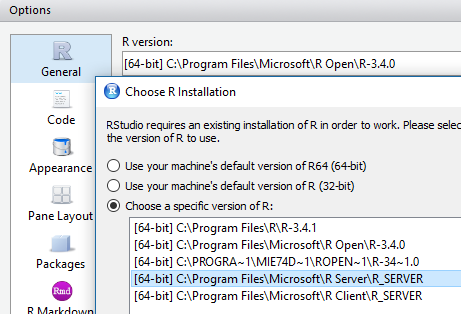 This time when looking at the rstudio process we do see BxlServer.exe as a process hosted by rsession.exe, so it seems that BxlServer.exe is specifically for the commercial versions of Microsoft R.

NOTE: There is no difference between the BxlServer.exe in MRS and SQL Server R Services. Well, not much anyway :), in next post we’ll see some differences.

By now you are probably saying something like: “Niels, this is very informative - NOT, get to the point - what is BxlServer.exe”. OK, so let us see some of the dll’s BxlServer.exe has loaded (click on the BxlServer.exe process and Ctrl-D):

Ooh, that’s interesting, look at the path and especially what is in the red rectangle: RevoScaleR.

RevoScaleR, is an R package providing both High Performance Computing (HPC) and High Performance Analytics (HPA) capabilities for R. HPC capabilities allow you to distribute the execution of essentially any R function across cores and nodes, and deliver the results back to the user. HPA adds the ability to handle big data in a high performance way. In addition to this (or rather as part of) RevoScaleR also has functionality to handle data access with high performance, and BxlServer.exe is the host for all this.

NOTE: In the next Internals post we’ll look more at RxLink.dll, and BxLinkServer.dll.

Finally, let’s make sure that BxlServer.exe actually is doing something when we execute an external script in SQL Server R Services. For that we’ll use some code we wrote in Internals V, where we discussed parallelism:

The data we create in Code Snippet 2 makes absolutely no sense at all, but it will serve our purposes of have some volume of data to work with, and cause the execution to run for a little while.

NOTE: Go back to Internals - V if you are interested in seeing what this code does.

The code we want to execute in SQL Server looks like so:

Among the Rterm and BxlServer processes you should see one BxlServer.exe process that has a CPU value, as well as consuming some memory:

So, as I mentioned above, it is the BxlServer.exe which is doing he heavy lifting in SQL Server R Services.

In this post we have now seen what happens when executing sp_execute_external_script:

Below I have tried to describe it in a figure:

Notice how, in Figure 15, there is nothing about how data gets back to SQL Server. That is something we will discuss in next post. Oh and yes, Figure 15 looks very much like one of the figures you can see in this post, and I freely admit I have looked at it :).