This post is a continuation of that post, and here we’ll look at what happens inside SQL Server when data is returned from the SqlSatellite and the R engine.

In Internals - XVI we looked at the packets being sent back to SQL Server from the SqlSatellite when a dataset is returned. We saw how there were actually two packets coming back, one small and one bigger, we deduced that those packets were:

The reason why the second package was bigger was due to the data being treated as originating from nullable columns, so quite an overhead was put onto the various columns:

Part of the overhead is the 32 bytes column overhead as we discussed in Internals - XIV, and a 28 bytes end-sequence, where the end-sequence appears once per data-set, and is not per column. It is somewhat like a row in the data-set. Part of this post is trying to figure out what goes on with this end-sequence.

When looking at the various sizes coming back, we see it is a lot less than what we saw in Internals - XIV, sending data to SqlSatellite. This is due to R supporting a lot less data-types than SQL Server, and therefore the data might be implicitly converted to a compatible data type.

To help us figure out the things we want, we will use Process Monitor, and WinDbg:

The reason there is a Sys.sleep in the code in Code Snippet 2, is so we can more easily determine at about what time data should be coming back from the SqlSatellite.

In Internals - XV, we used WinDbg, and we saw the routines involved when sending data to the SqlSatellite:

After having attached to the process, execute in the WinDbg console: x sqllang!CUDXR_ExternalScript*. That returns quite a few routines, from which we can see if anyone looks promising. When I ran it I found a couple that caught my interest:

Let’s now set breakpoints at the two routines above, plus a breakpoint at sqllang!CSatelliteCargoContext::SendPackets. The reason for the breakpoint at SendPackets is that it is there to indicate where we are, as PullRow can be called based on processing inside SQL Server, not only as result of data coming back from the SqlSatellite. Now execute the code in Code Snippet 2, and you’ll see how:

A couple of questions comes up after having seen the above:

Just to confirm the last bullet point; change the TOP clause in Code Snippet 2 to 5 instead of one and execute again. The breakpoint at ProcessResultRows is now hit 6 times. So ProcessResultRows is definitely related to number of rows returned, but also something else. Let’s see if we can figure out what happens here:

There should, after completing the execution, be four files, let’s compare these four files.

NOTE: If you haven’t done the wt as above, you can download the four files, plus a couple of others from here.

What we see is that the first file is bigger than the others, it has ~165 lines whereas the others are between 65 - 70 lines. The last third part of the first file (from about line 104), looks very much like the second and third files. We can also see that the fourth file is not similar to the other tree.

Now what we’ll do is to look at the similarities between the three first files and try to understand what is happening. In the files we see some interesting routines:

By now we understand that ProcessResultRows is doing what it says on the packet; it takes the rows coming back from the SqlSatellite, processes it, and then outputs it through sqllang!CUDXR_ExternalScript::OutputRow. From what we see in Code Snippet 5, it looks like the rows being outputted is outputted in the TDS format - look at the calls to sqllang!CTds74::SendRowImpl. This would make sense since clients etc., do not “speak” BXL, and from what we’ve seen - BXL is what is coming back from the SqlSatellite.

EDITED: The following section down to PullRow has been slightly changed, to make it more readable.

From what I gather, the ReceiveOneDataChunk routine reads in data that has been received from a socket, the ReadPayloadHeader reads the column header for each column in the result-set being returned, in order to determine data types etc. The SendAckMessage, sends a message back to the SqlSatellite, most likely indicating that SQL Server has received the two packages being sent from the SqlSatellite. We can confirm the “sending message back” part by:

Execute the code in Code Snippet 2, and when you hit the ProcessResultRows breakpoint, look at the output from Process Monitor. You should see something like so:

We see in Figure 1 how the two data packets have been sent to SQL Server, but nothing else has happened. Enable the WriteMessage break-point and continue the execution. We’ll now break at WriteMessage, but nothing has happened in Process Monitor (no more packages have been sent or received). However, when we now continue the execution we’ll see in *Process Monitor how a packet is sent to the SqlSatellite (BxlServer.exe) with a length of 28 bytes, and then two packets are returned back from the SQlSatellite: 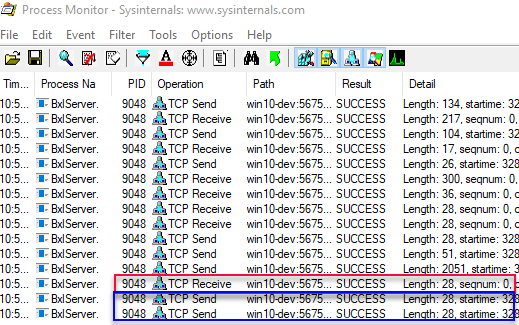 From the code in Code Snippet 7 we see how there is a ReceiveOneDataChunk call, which indicates data is being read after having been received from a socket. It also looks like that this last ProcessResultRows indicates that there are no more data: sqllang!CUDXR_ExternalScript::EndOutput, sqllang!CTdsConn<0>::EndResultSetImpl and sqllang!SendDoneWarnings. The question is what indicates this in the packets SQL Server receives from the SqlSatellite? This is now some speculation from my side, but I strongly suspect this originates from one of the 28 byte packets coming back from SqlSatellite after SQL Server sent the ack message above. I also think that the end-sequence that we mentioned in Internals - XVI as well as in the Recap above, has something to do with this.

Now we should be able to answer the question above about why there are one more ProcessResultRows than rows returned, and we should also have a fairly good grasp of what happens when processing rows returned from the SqlSatellite:

So, what about the first question we had above; why is there a PullRow called straight after SendPackets, e.g. the PullRow happens before data is returned from the SqlSatellite? To try to figure this out, let’s disable all breakpoints, except for the breakpoint at sqllang!CUDXR_ExternalScript::ProcessResultRows, and execute Code Snippet 2 again (you can take out the Sys.sleep if you want). When you execute and hit the breakpoint ProcessResultRows for the first time, look at the call-stack: k:

When you hit the PullRow for the second time, do a wt. You’ll see how the code continues, up until the execution starts in the R engine, and the code hits Sys.sleep. At this stage, copy out the output from wt into a new file (call it pull_row_1.txt).

NOTE: The trace files for PullRow are also part of the download mentioned above.

At some stage the execution continues, and after the full wt, copy the whole trace into a second file pull_row_full.txt. Now open the pull_row_1.txt file, and look at the last 11 lines (for me it starts at around line 888):

It seems from the code in Code Snippet 9, that we wait to be signaled, so the execution can continue, and when we open the “full” file (pull_row_full.txt), we can see that, that is indeed what happens:

From Code Snippet 10, we see how Pull is signaled, and continues on with a Switch and a TaskTransition. The signal happens when SQL Server receives data from the SqlSatellite. There is an internal method sqllang!CSQLSatelliteConnection::ReadCallBackInternal which is being called when data is received, and part of ReadCallBackInternal is a signal call sqllang!EventInternal<SuspendQueueSLock>::SignalAll.

Having briefly discussed signaling, let’s go back to pull_row_full.txt and look further down in the file, where we see our first ProcessResultRows:

We see how the code in Code Snippet 11 is the same as the first lines of the file wt1.txt.

Now we should be able to answer the first question we had; why PullRow is called directly after SendPackets: it is being called to wait for a call-back and continue handling receiving of data. But what else goes on in PullRow, we see the first ProcessResultRows at around line 3342, so there must be other “stuff” happening as well?

In fact, if we look a couple of lines above where we found ProcessResultRows in pull_row_full.txt we’ll see something like so:

What we see in Code Snippet 12 is how, above the first call to ProcessResultRows, we are in a routine named ProcessOutputSchema, and if we go upwards we see how there are at least three more routines dealing with schema:

If we were to set breakpoints at those routines together with PullRow and ProcessResultRows, the flow (highly simplified) when executing would be something like this:

So what SQL Server is doing is that before it start processing the returning rows, it determines what the schema is for the result-set. As far as I can tell, SQL Server uses both the initial “small” packet from the SqlSatellite as well as the packet containing the actual result-set data.

This post tried to determine what SQL Server is doing when data is being returned from the SqlSatellite. We saw how, after the data packet(s) were sent to the SqlSatellite:

The figure below illustrates the flow: 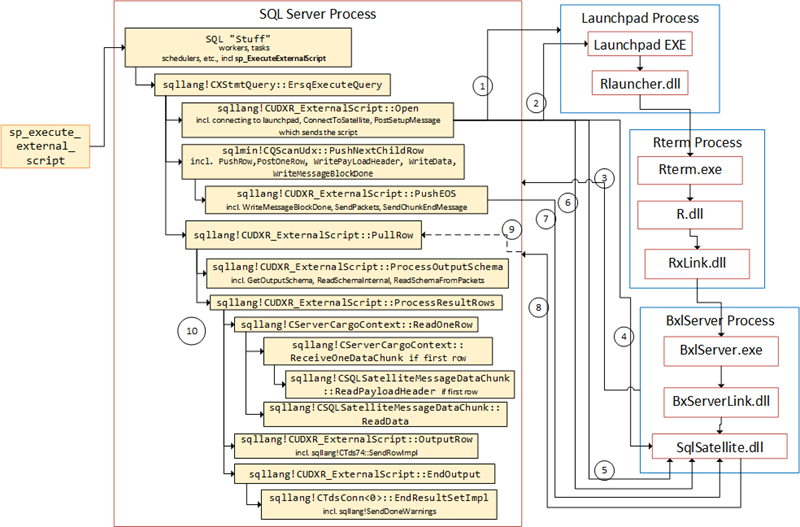 If you have read Internals - XV, you see how Figure 3 is similar. I have however “compacted” the sending data to SqlSatellite somewhat. The numbered arrows shows the communication out to and in from SQL Server, and in what order it happens:

There are still a couple of things to discuss about data coming back to SQL Server, as well a how errors are handled, and we’ll do that in a future post.