This post is the third post in a series where I look at the Java extension in SQL Server, i.e. the ability to execute Java code from inside SQL Server.

In this post we look at something related to the data passing post; how to handle null values.

DISCLAIMER: This post contains Java code. I am not a Java guy, in fact, the only Java I have ever written is the code in this post and the previous SQL Server 2019 Java posts. So, the code is not elegant in any shape or form, and I am absolutely certain it can be done in a much better way. However, this is not about Java as such, but how you call Java code from SQL Server, and what you need to implement on the Java side.

Before we dive into this post’s topic, let us do a recap.

In the SQL Server 2019 Extensibility Framework & Java - Passing Data post, we looked at how we pass data back and forth between SQL Server and Java. In the Java extensions we do not have the InputDataSet, and OutputDataSet variables, so we need to define class member arrays for the columns we send in and pass back out, as well as a variable indicating the number of columns we return:

The code we see in Code Snippet 1 represents a class to which we pass in a data set consisting of three columns. The class passes back a three column data set. What the code does should be pretty self-explanatory, but there are two array variables that we are not doing much with: inputNullMap and outputNullMap, and today we look at them.

In today’s post, we use some data from the database, so let us set up the necessary database, a table, and load data into the table:

We see from Code Snippet 2 how we:

So why do we care about null values? Well, the reason is that in SQL Server all data types are nullable, whereas in Java that is not the case. In Java, like in .NET, primitive types (int, etc.) cannot be null, so code like this:

When we try and compile the code in Code Snippet 3 we get a compile-time error: error: incompatible types: <null> cannot be converted to int. In this case, the compiler saves us, but if we now think about passing in data from SQL Server, we can get into trouble as columns in the dataset can be null. So what do we do?

In the SQL Server 2019 Java Extension there are a couple of things helping with null values:

In previous posts, I have briefly mentioned the Java extension components. They are similar to the launchers, and the “link” dll’s for R/Python, and they are involved when passing data to Java as well as receiving data from Java.

NOTE: I cover these components in future posts.

Let us try to get an understanding of what the components do when passing data to Java. We start with doing a simple SELECT RowID, x, y FROM dbo.tb_NullRand10, where x and y are integer columns: 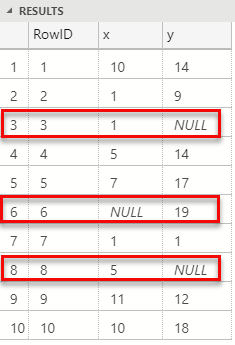 In Figure 1, (highlighted in red), we see, which we also mentioned above, how primitive types are nullable in SQL. However, let us say we have some Java code looking like so:

In the code in Code Snippet 4 we see how we expect a three-column dataset passed in, which we then print out in the foo method. The immediate problem is that, as we see in Figure 1, the dataset consists of null values, so what happens if we execute some SQL code looking like so:

When we run the code in Code Snippet 5 the result looks as follows: 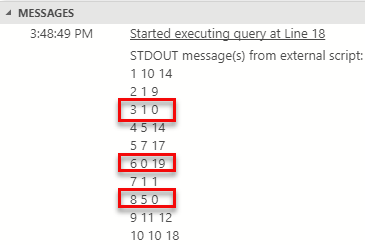 Ok, we did not crash and burn, that is good! However, what about the rows with the null values, RowId’s 3, 6, and 8? Notice in Figure 2 how the values printed out are set to 0 where we in Figure 1 saw nulls. So something has “automagically” converted the nulls to 0’s. That something is one of the Java extension components, and from a high level it works something like so (this is somewhat of guesswork from me):

That is nice, but now we receive 0’s instead for nulls, what about if we want to handle null differently than 0. Think about how SQL Server handles null in some of its functions; columns with null values are ignored. With nulls replaced with 0’s, what do we do?

Null maps solve the problem of null values coming back with the default value for the type. Remember what we said in the previous post and in the Recap above that null maps are two-dimensional arrays indicating whether a value is null or not, and that we have two null maps:

For input data we use the inputNullMap, or rather one of the Java extension components populates the map, and we use it in our code like so:

We see in Code Snippet 6 how we have a new method: bar, where we loop through the inputNullMap array. For each row, we loop the columns and print out the boolean value indicating if a column value is null or not.

Let us change the code in Code Snippet 5 to call into the bar method:

Apart from calling into the bar method in Code Snippet 7 the other difference from Code Snippet 5 is that we only push in rows which have null values, (to keep it short). The result we see after we execute looks like this: 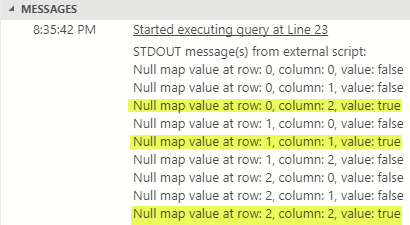 We see, highlighted in yellow in Figure 3, how the null map indicates which columns have null values.

So how do we use this? Let us assume we have code which takes a dataset and multiplies two columns together (x and y) and returns the RowID and the result back to the caller:

We see in Code Snippet 8 how we:

We then loop through the input data and assigns the RowID (inputDataCol1) to outputDataCol1, and sets the value of outputDataCol2 to be inputDataCol2 * inputDataCol3. If we at this stage compiled, moved the .class file to the CLASSPATH location, and executed as per Code Snippet 5 (obviously edit the @script variable to be: @script = N'NullValues.multiplier'), this is the result: 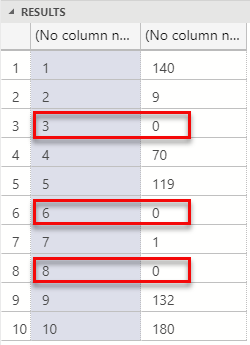 When we now execute the code in Code Snippet 5, (after compiling etc.), and having changed the @script parameter to: @script = N'NullValues.multiplier2', the result is as so: 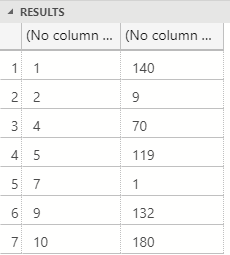 We see in Figure 5 how the rows with null values are excluded from the dataset, how cool is that?! However, what about if we want null values back, like the result of this code:

When we run the code in Code Snippet 10 we get a result of NULL, and that is expected in SQL Server: any operations against a NULL value, yields NULL. To “mimic” that behaviour we use outputNullMap.

Some things to notice in Code Snippet 11:

After compiling etc., we execute the code in Code Snippet 5, pointing in the @script parameter to our new method. The result looks like so: 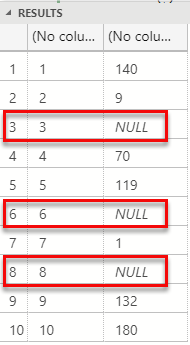 Ok, we have now seen how we use the inputNullMap and outputNullMap to handle null values, and we know we need to use the null maps for primitive types. However, what about strings, as a string is not a primitive type, and is allowed to be null in Java. Let us have a look.

NOTICE: When we push string data from SQL Server, the SQL data type has to be either nchar or nvarchar.

The code in Code Snippet 12 should not come as a surprise. We see how we:

We compile the code in Code Snippet 12 and move the .class file to the CLASSPATH location. We then use SQL code like this:

We see in Figure 7 how we receive null values for the rows where the column was null. However, we also see that the null map value for those columns is set to true. So even for strings, it looks like the null map is used, at least for input data.

So, what about output data. Let us create a new method which populates the output column arrays with some random data:

We see in Code Snippet 14 how we output three rows with two columns, where the second column is a string. In the second row, the string column is set to null, and the outputNullMap is also set to null for that column. After compilation, etc. we use following SQL code:

The code runs fine when we execute, and the result looks like so:

As expected we get a null value back in the outlined row in Figure 8. This does not tell us though whether the outputNullMap is required for strings. Let us comment out all code inside the for loop that references the outputNullMap. Keep the initialization of the null map as is (outputNullMap = new boolean[numberOfOutputCols][numOutRows];), compile, etc. Remember that for output data sets with no nulls we only need to initialise the outputNullMap. The theory is that for non-primitive data types we do not need to set the null map.

When we now execute the code in Code Snippet 15 we get an error:

Ok, so the theory above does not seem correct based on the exception we see in Figure 9. So what about if the column is null, but the outputNullMap says false (not null):

When we execute after having compiled the code after the change in Code Snippet 16, we get the same exception as we see in Figure 9. Also, if we assign a value to the string column, but set the outputNullMap to be true:

When we execute the code in Code Snippet 17 we get:

Hmm, that is interesting! We see in Figure 10 how we do receive data back, but also an exception, and notice that the exception has a different HRESULT than the exception in Figure 9.

NOTICE: I do believe that Microsoft can do a better job with the errors returned from the Java extensions, as they at the moment are not very descriptive.

We do not receive all rows, the row where the actual string value is not null but the null map says it is, is the last row. Oh, and the value for the column is what the null map say - null.

We now know that the null maps are needed for strings as well as primitive types. It also seems like the Java extensions are doing some validation when data returns from Java.

Wow, this turned out to be quite a long blog post! So what have we found out:

When we deal with data passing in Java code we need two null maps:

In your code, you can read the inputNullMap to decide how to process the data pushed in.