In this post, we look at how to build Boost.Python and Numpy. We look at it from a perspective where we want to use what we build as part of a bridge between SQL Server 2019 and Python. However, if you are not interested in SQL, the post should still give you some - hopefully - useful information.

Please note that I am a SQL dude, and my knowledge of Boost, Python and Numpy is limited at best. So take this post for what it is; the steps I took to successfully build Boost.Python and Numpy on a Windows box.

In my post, Bring Your Own R & Python Runtimes to SQL Server Extensibility Framework I wrote about how we can use other R and Python runtimes in SQL Server Machine Learning Services than the ones that come “out of the box”. In the post, I wrote that if you want to bring a Python runtime other than version 3.7.x, (like 3.8, 3.9, etc.), you need to build your own bridge; a SQL Server Python language extension.

A language extension is a C++ dll acting as a bridge between SQL Server and an external runtime - in this case Python. To interact between C++ and Python you often use Boost, and for the SQL Server Python extension, Boost libraries are required.

What do we need to do this:

Obviously, if you want to use what we do here to build a Python SQL Server Language Extension, you need the source code for the language extensions and SQL Server. That will be covered in a future post.

Most of the Boost libraries are pre-built, however, Boost.Python needs to be built before we can use it. Initially, I thought “how hard can it be to build this”, well - it turned out a lot more complicated than I imagined. This, in my opinion, is due to that the Boost documentation is less than stellar, which is one big reason I wrote this post.

There is no installation file as such, I just unzipped the file I downloaded above to a location on my box: C:\: 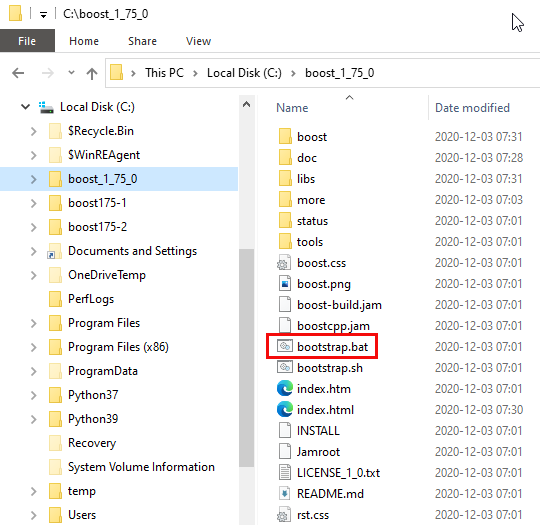 We see in Figure 1 the Boost installation. The question now is what we do with it? We know from above that we somehow have to build Boost.Python, but what do we build with?

It turns out that you have to bootstrap the Boost build engine, Boost.Build. On Windows, you do that by running the bootstrap.bat file, outlined in red in Figure 1:

In Code Snippet 1 we see how I from command prompt have cd:ed into the Boost directory. I indicate that I want to use the Visual Studio 2019 toolset by defining the vc142 flag. When I execute the script, some information is output to the console, and when the script has finished, I see: 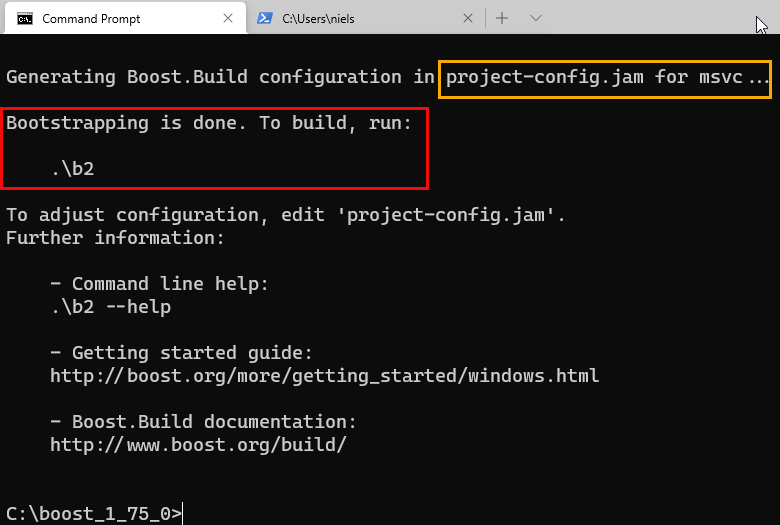 In Figure 2 I have a couple of things outlined in red and yellow:

Above I mentioned the project-config.jam file created when you run the bootstrap script. There are two more configuration files used by b2.exe:

Create a file in your home directory and name it user-config.jam. Edit it to look like so:

We see in Code Snippet 2 how we indicate where to find the Python executable, Python header files, and Python lib files.hr

Now when we have a configuration, it is time to build.

As mentioned above to build, we run b2.exe. If we were to cd into the Boost install directory and just do: b2, then we would build everything - and it would take a while. Here we are only interested in building Python, so we need to limit what b2 does.

After browsing for information around Boost, I started with something like so:

Let’s look at the code in Code Snippet 3, and see what it means:

Running the code we see in Code Snippet 3 “spews” out a lot of information to the console, and if something is not working correctly, it can be difficult to see what is going wrong, due to the amount of data being output.

An example of something going wrong was when I initially ran this code on Windows 10; the boost175 directory was created as expected. However, when I drilled down in the directory, I saw only a Python lib file, but no Numpy lib file. I knew there should be both Python and Numpy files, so something was clearly not right.

After tearing my hair out for quite a while, I came across the B2 User Manual, and invocation options. In there, I found two option flags:

When I ran the build as in Code Snippet 4 it produced some useful output:

NOTE: The link here has more information about the bug.

I have since then upgraded to the latest Windows Dev build and when I run the code, everything works fine:

In Figure 4 we see how we have lib files for both Python and Numpy! Success!

When you look at the console output when you do the build you may see something like so: 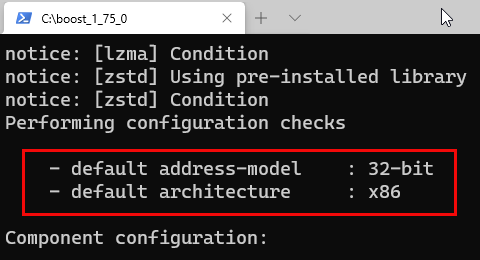 Hmm, that does not look right. In the code we definitely said address-model=64, but in the output, it says 32 bit. It turns out this is a bug in the build output, so nothing to worry about.

We have in this post looked at how to build Boost.Python, and Numpy on a Windows 10 box:

You can now start to use the libs created. In a future post we’ll see how to create the SQL Server Python extension, using the files above.