This blog post came by, by accident, lol. A couple of weeks ago, I started to prepare for a webinar: Analyze Billions of Rows of Data in Real-Time Using Azure Data Explorer. One of the demos in that webinar is about ingesting data from Apache Kafka into Azure Data Explorer. When prepping, I noticed that my Confluent Cloud Kafka cluster didn’t exist anymore, so I had to come up with a workaround. That workaround was to use Azure Event Hubs instead of Kafka.

Since I already had the code to publish data to Kafka and knew that you could use the Kafka client to publish to Event Hubs, I thought I’d test it out. I did run into some minor snags along the way, so I thought I’d write a blog post about it. Then, at least, I have something to go back to. This post also looks at how to set up an Event Hubs cluster.

Event Hubs and Kafka are pretty similar, as I mentioned above. Let us compare the concepts of the two:

As we see in Table 1, there is not much difference between Kafka and Event Hubs. The one difference worth noting is the Event Hubs namespace instead of the Kafka cluster.

An Event Hubs namespace is a dedicated scoping container for event hubs, where an event hub as mentioned above is the equivalent to a Kafka topic. We can see it as a management container for individual event hubs (topics), and it provides a range of access control and network integration management features.

For this post, the important part is that the namespace provides IP endpoints allowing us to publish to the namespace and its individual event hubs (topics).

One of the endpoints the namespace provides is an endpoint compatible with the Apache Kafka producer and consumer APIs at version 1.0 and above.

So if your application uses a Kafka client version 1.0+, you can use the Event Hubs Kafka endpoint from your applications without code changes, apart from configuration, compared to your existing Kafka setup.

NOTE: When I above say you only need to change the configuration, I assume that the Kafka topics have corresponding EventHubs (remember Kafka topic = Event Hubs EventHub).

An interesting point here is that it is not only your Kafka applications that can ~consume from~ publish to Event Hubs but any application that uses Kafka Client 1.0+, like Kafka Connect connectors!

This section is here if you want to follow along. This is what you need:

Ensure the client is installed. In Python, I do it using pip, like so:

After having run the code in Code Snippet 1, or similar code for your language, you are good to go.

Above I mentioned about an application publishing to Kafka being optional. Let us here take a look at a very simple example.

In this example, I have an Azure Confluent Cloud cluster looking like so:

In Figure 1, we see my Confluent Cloud cluster named kafkaeventhubs and how that cluster has one topic - testtopic - with four partitions.

I have a very basic Python application publishing to the testtopic looking like so: 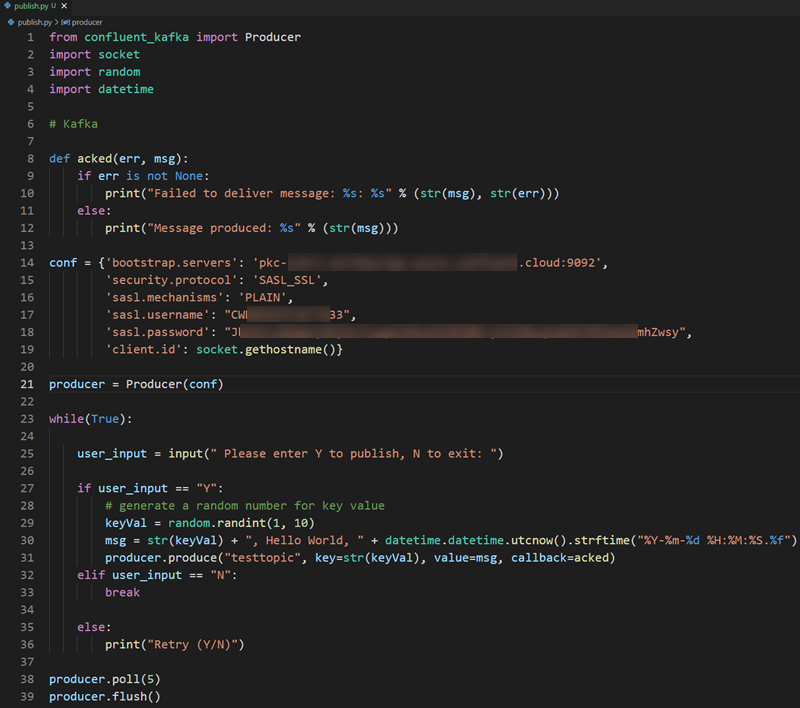 As we see in Figure 2 the app is not doing anything advanced. It publishes a comma-delimited message containing the random key value, “Hello World”, and a timestamp.

What is interesting in the code is the configuration string (assigned to the variable conf) in lines 14 - 19, and specifically the following properties:

Why I say these are interesting is these are the ones that are in play if we want to publish to Event Hubs.

Having seen the pre-reqs lets us create a namespace in Event Hubs.

There are multiple ways we can create an Event Hubs resource, where the Azure Portal is one of them.

Instead of doing a step-by-step explanation of creating an Event Hubs namespace, I suggest you read the Microsoft article Quickstart: Create an event hub using Azure portal. While you are doing that, I will create an Event Hubs test namespace for this post.

NOTE: When you create the namespace, you have to ensure you create it under the Standard pricing tier (or higher), as Basic does not support Kafka.

We are all back? Cool, I ended up with this:

As you see in Figure 3 I ended up with an Event Hubs namespace called kafkaeventhubs and an Event Hub named testtopic, the same as I have in Confluent Cloud.

So now we have all we need to replace Kafka with Event Hubs - almost. We still need to see how to configure the Event Hubs security and authentication.

When using Event Hubs, all data in transit is TLS encrypted, and we can satisfy that by using SASL_SSL. This is exactly as in the Kafka code. Using SASL_SSL we have basically two options for authentication: OAuth 2.0 or Shared Access Signature (SAS). In this post, I use SAS, which matches what I do using Kafka.

If you click into the testtopic Event Hub we see in Figure 3 and look at the left-hand side; you see something like so:

We see under Settings in Figure 4 Shared access policies (outlined in red). When we click on it:

We are being told that we don’t have any policies set up, as outlined in yellow in Figure 5. Cool, let us create a policy. We do that by clicking on the + Add button, which is outlined in red in Figure 5:

By clicking the + Add button, we get a dialog Add SAS Policy as shown in Figure 6. We give it a name and the claims (what it allows), and then we click the Create button at the bottom of the dialog (not shown in Figure 6):

In Figure 7, we see the generated policy and the claims. Clicking on the policy, we get yet another dialog: 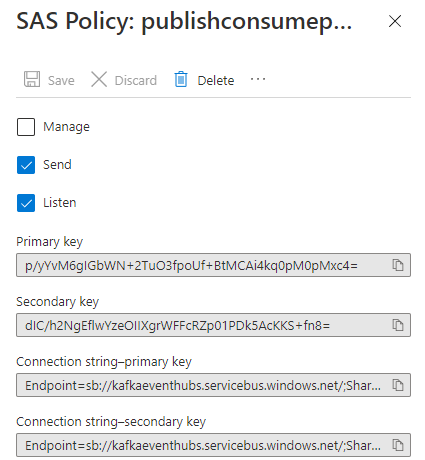 The policy we created consists of two keys and corresponding connection strings as in Figure 8. The reason for having two is that in a production environment, you may want to cycle and regenerate the keys, so while you regenerate one, you can use the other.

Copy one of the connection strings as that is what we use for the Kafka client configuration:

In Figure 9, we see one of my connection strings. I have outlined in red the endpoint URL, and this is the one we use for the bootstrap.servers property in the configuration.

Now we should have everything we need to use the Kafka client to publish to the EventHub.

Above I listed the configuration properties used when I connect to Confluent Cloud. Let us see what they should be when publishing to Event Hubs:

The bootstrap.servers property defines the endpoint(s) where the client connects to. In Figure 9, I outlined the endpoint URL and said it would be used for bootstrap.servers. At the beginning of this post, I mentioned how Event Hubs exposes a Kafka endpoint. It does that on port 9093. So:

Onto the security and authorization part.

As we use Shared Access Signature, We do not need to change security.protocol or sasl.mechanism; we keep them as SASL_SSL and PLAIN, respectively..

At the very beginning of this post, I mentioned how I ran into some snags when trying to use the Kafka client to publish to Event Hubs. This is the part that caused me issues.

Reading documentation and blog posts when trying to connect to Event Hubs, I concluded that sasl.password should be set to the whole connection string you get from the SAS policy. OK, that’s cool - but what about the user name?

In Code Snippet 3, we see how sasl.password is set to the SAS policy’s connection string and sasl.username to $ConnectionString.

The complete configuration required to connect to and publish to Event Hubs looks like so:

After editing the conf variable, you can run the application. Let it publish some messages and then check what you see in the overview for the testtopic Event Hub: 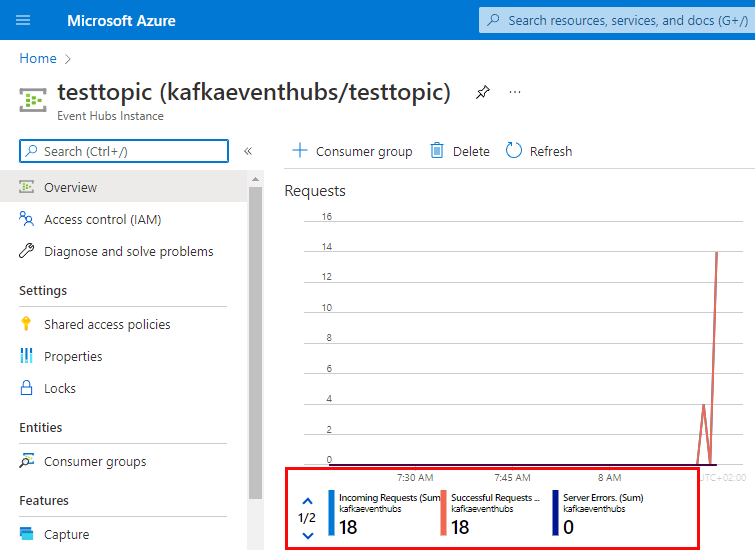 I said above that there is no straightforward way to see if messages/events arrive into the Event Hub. Well, when we now know how to connect and publish to Event Hubs using the Kafka client, we could easily create a consuming application. However, I leave that up to you.

In this post, we have seen how to use the Kafka client to connect and publish messages to an Azure Event Hub.

We compared the terminology of Kafka with Event Hubs, and saw that it is more or less the same. The two major differences are:

We use port 9093 on the Event Hubs endpoint to connect the Kafka client. When using SASL_SSL and the PLAIN sasl.mechanism, the user name we use is$ConnectionString, and the password is the entire connection string from the Event Hub’s Shared Access Signature policy.