You who read my blog know that during the last year, (or so), I have been writing about SQL Server 2019 and the ability to call into Java code from SQL Server:

It has been a fascinating “journey”, since SQL Server 2019 is still in preview, and there have been changes in how you call Java code along the way. In this post, we look at some relatively recent changes to how we handle null values in datasets.

If you have not done any Java code in SQL Server, or at least not recently, here are a couple of posts which introduces you to Java in SQL Server:

In today’s post, we use some data from the database. The code to insert the data is the same we used in a previous post: SQL Server 2019 Extensibility Framework & Java - Null Values:

The data we insert is entirely random, but it gives us something to “play around” with.

Let us see what the data looks like, by executing: SELECT RowID, x, y FROM dbo.tb_NullRand10;: 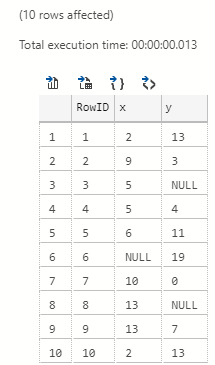 Enable Java in the Database

To use Java in the database, you need to do a couple of more things:

Now, when we have a database with some data and Java enabled we, can start.

In the null values post mentioned above, I mentioned that there are differences between SQL Server and Java in how they handle null. So, when we call into Java from SQL Server, we may want to treat null values the same way as we do in SQL Server.

I wrote about this in the SQL Server 2019 Extensibility Framework & Java - Null Values post mentioned above. However, that post was written before SQL Server 2019 CTP 2.5. In CTP 2.5 Microsoft introduced the Java SDK, and certain things changed. Amongst the things that changed is the way we handle nulls when we receive datasets from SQL Server in our Java code.

Let us see how null handling works now post CTP 2.5. We use similar code to what we saw in the null post above:

The code in Code Snippet 3 “echoes” back what it receives as input dataset and we see how we:

NOTE: If you wonder about why the method is named execute and what the PrmitiveDataset is; the post here explains it.

After we have compiled and packaged the code into a .jar file we can deploy:

As we see in Code Snippet 3 I named my .jar file sql-null-1.0.jar and I deployed it as an external library: SqlNullLib. Since I deploy to a local SQL Server instance, I can use a file location for my .jar.

We see in Code Snippet 4 how we call into the NullValues class in the sql package and how we use the same SELECT statement that generated the resultset we saw in Figure 1. When we execute the code, we see: 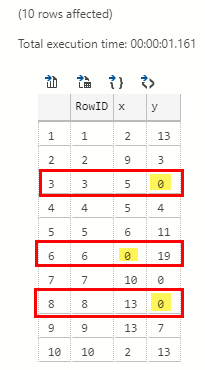 Well, as we said in the null post, this is because the Java language C++ extension converts the null values to the default value for the data type in question.

NOTE: The Java language C++ extension is the bridge between SQL Server and your Java code. The SQL Server 2019 Extensibility Framework & External Languages post covers it in some detail.

The question is, why do we care that a null value comes across as zero, at least we do not get a null exception? Let us take a look at the following Java code:

The result in Figure 3 looks OK, so let us see what it looks like if we run a similar query in SQL Server:

The result of the query in Code Snippet 6 looks like so:

We see in Figure 4 how the result of the average calculation, (outlined in red), differs from the Java calculation. The question is why this is; it was the same data in both calculations? Well, was it; we see in Figure 4 the highlighted part at the top: “Null value is eliminated …”. So what happens is that for certain operations SQL Server eliminates null values, as SQL Server treats nulls as unknown.

As the Java language C++ extension converts nulls, we need to handle it in our Java code.

So how do we then figure out whether a column has a null value? Well, since the Java language extension passes data into the execute method via the PrimitiveDataSet class, let us have a look at the base class for PrimitiveDataSet: AbstractSqlServerExtensionDataset:

We see in Code Snippet 7 how the AbstractSqlServerExtensionDataset has a section for metadata, and in that section is a method: getColumnNullMap. The method takes an integer as an input parameter, and it returns an array of type boolean.

NOTE: The Java SDK is open source, and you find it here.

This is what happens when the Java language C++ extension populates the dataset which is used as an input parameter:

With this in mind we can change the code in Code Snippet 5 to handle null values, or rather handle values in the dataset that originates from a SQL Server null value:

The result when executing the code in Code Snippet 4 against our new code looks like so:

We see in Figure 5 how our Java calculation now gives the same result as the T-SQL calculation. Awesome!

We have now seen how to use getColumnNullMap to distinguish input values that come in as NULL from SQL Server, which the Java language C++ extension converts to the default value for the Java data type.

What about if we need to return null values to SQL Server in a return dataset, but the Java data type is non-nullable? I.e. we receive data in the input dataset, and some column values for a non-nullable Java type are null when passed in from SQL Server. If we wanted to, for example, add the column to another column, the sum should be NULL if we were to handle it the same way as SQL Server does.

So how do we indicate to SQL Server that a column value is null, even though it has a value in Java? Let us go back to Code Snippet 2 where we discussed how to return data to SQL Server from Java code. After “newing” up an instance of PrimitiveDataset, we defined the metadata for the columns via the addColumnMetadata method. We then added the row arrays for the columns through the add*Type*Column, (in our case it was addIntColumn), and it is in that method the “secret” to null values lies. Let us go back to AbstractSqlServerExtensionDataset and look at the signature for addIntColumn:

Look in Code Snippet 9 at the third parameter in the add method. See how it takes a boolean array, and how the name “gives it away”: nullMap. If we look at other methods for non-nullable Java types, we see that all of them have this parameter, whereas add methods for types that are nullable do not have it.

So for non-nullable types, we define boolean arrays, and in those arrays, we indicate what row value(s) is null. Let us see an example:

What we see in Code Snippet 10 is a somewhat contrived example where we return a dataset in which we want certain column values to be NULL in SQL Server. We see how we:

A couple of things to notice in the code in Code Snippet 10:

To see that our code works we use following code:

The result we get when executing the code in Code Snippet 11, looks like so: 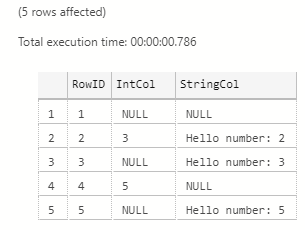 When we look at Figure 6 we see that our code worked, and how the Java C++ language extension converted the 0 values in the integer column to NULL based on the null map.

We care about null values because, in SQL Server, all data types are nullable, whereas, in Java, that is not the case. In Java, like in .NET, primitive types, (int, etc.), cannot be null. The Java C++ language extension handles the mismatch between nullable in SQL Server and non-nullable in Java, whereby it converts null values in data from SQL Server to the data type’s default value for Java. Going the other way, from Java to SQL Server, the C++ language extension converts the values supposed to be null to actual null values.

The way we handle null values after the introduction of the Java language SDK is that we: