In September 2020, Microsoft open-sourced SQL Server Machine Learning Services, (SQLMLS), language extensions for R and Python. If you want more information, here are some blog posts I have written about it:

In the last post, which looks at using Python 3.9 in SQL Server Machine Learning Services, I wrote this at the very end:

In the post, we wrote a new language extension to handle Python 3.9, and that just worked fine. However, when I was doing some other things, I noticed some side effects, and in this post, we look at those side effects and how to solve them.

NOTE: The two posts mentioned above has been updated as a result of this post. If you now follow the posts above you may not see the errors we discuss here.

Before we dive in, let us look at the pre-reqs (if you want to follow along).

In this post, I am not going into detail about language extensions and external languages and such. If you are unsure about this, please read the posts linked to above.

If you followed along in post about Python 3.9 and created the PYTHONHOME environment variable, please delete it. After you have deleted it restart the Launchpad service for the SQL Server instance where you run the code.

We need SQL Server CU3+ with Machine Learning Services and Language Extensions installed together with Python. Execution of external scripts needs to be enabled as well. You also need a database where to deploy the external languages to. In this post I use a database called ExtLangDB:

Since in my previous posts I have used the same database name we see in Code Snippet 1 we see how I drop the database if it exists before I create it. I do this to clear out any old “cruft” in the db.

Let us make sure that everything looks OK in your database:

Code Snippet 2: Make Sure All is OK

In Code Snippet 2 we look for what external languages we have installed, and the result is like so:

OK, so according to Figure 1 all seems OK in the database. We have both R, and Python outlined in red, installed as part of Machine Learning Services and Language Extensions.

We also need an extension for Python 3.9. You can follow my post here, and build it yourself. If you don’t feel like building it, you can download the extension we built in the post in the previous sentence from here. Going forward I call this extension Python39.

After downloading/building, place them in a location from where SQL Server can access them, and name them so you can see who is who.

Let us make sure that the “native” Python, the one that comes as part of SQLMLS, (seen in Figure 1), works correctly in our database:

The code we see in Code Snippet 3 is the same as in the previous posts.

You see in Code Snippet 3 how the @language parameter is set to Python. That indicates using the Python installed as part of Machine Learning Services and Language Extensions when we check the Python check-box, (PythonSQLMLS).

The result of running the code in Code Snippet 3 is like so: 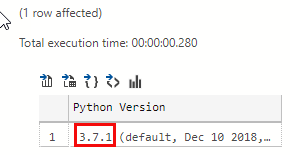 We did the same as above in the Bring Your Own R & Python Runtimes to SQL Server Extensibility Framework, and we then continued with creating an external language from the Microsoft Python language extension:

In Code Snippet 4 we see how:

We check that the creation of p37 succeeded by executing the code in Code Snippet 2. In the result, we should now see p37 in addition to what we see in Figure 1.

When we see that we indeed have a new external language we:

Having created the PYTHONHOME variable, we restart the Launchpad service. We are now ready to execute the code in Code Snippet 3, but we need to change the @language parameter to p37 instead of Python.

The result we get back when executing the code should look like so: 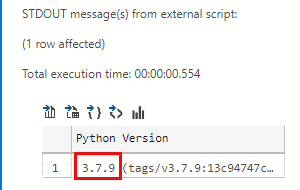 Yay, we see from Figure 3 how we now execute against Python 3.7.9 instead of 3.7.1. So yes, we are executing against another Python runtime than PythonSQLMLS.

If you get an error when you execute the code and the error looks something like this: “A script error occurred during execution of ‘sp_execute_external_script’ with HRESULT 0x80004004.”, the most common causes for this are:

Cool, we have now executed using a later version of the Python runtime than what is installed through SQLMLS. That’s where we finished the Bring Your Own R & Python Runtimes to SQL Server Extensibility Framework post.

What we didn’t do was to see what happens if we now want to run the code in Code Snippet 3 and use PythonSQLMLS, (@language=Python):

This.Is.Not.Good! We get a ModuleNotFoundError, as in Figure 4, and the module we cannot find is revoscalepy, which one of the proprietary Microsoft Python modules.

What we see here is one of the side effects I observed when doing my previous blog posts. We’ll come back to this after looking at using the Python 3.9.1 runtime.

In the Write a Python 3.9 Language Extension for SQL Server Machine Learning Services post we said that the Microsoft open-sourced language extension can only be used for Python 3.7.x. If we want to use another runtime, like 3.9.x, we need to re-compile the source code against the Python version we want to use. In the post we did that and saw how we executed against Python 3.9.1.

When we run the code, we see:

What happens if we now change back and execute with @language=Python, or @language=p37:

Once again - not good! As we see in Code Snippet 5 we get a new error back saying something about not initialising something.

As Python 3.9 seems to work, let us just confirm that. From command prompt we cd into the Python 3.9 installation. For me, it looks like: cd C:\Python39.

In there, we execute:

In Code Snippet 6 we see how we want to execute some Python code that prints out the Python version we execute. When we run the code, we get back the same we see in Figure 5. So that works.

Hmm, that - once again - does not look good:

We see in Figure 6 how we get exactly the same error as in Code Snippet 5. What is going on here?

A clue to the issue is highlighted in yellow in Figure 6: File "C:\Python39\lib\io.py". We are executing against Python 3.7, but for some reason Python tries to touch a file in the Python 3.9 lib directory. Huh?

The culprit here is the PYTHONHOME system environment variable we created. We created it as the documentation around the Python language extension states it is required.

The PYTHONHOME system environment variable is a well known variable to the Python engine. The variable changes the location of the standard Python libraries. In the example where the variable was set to Python 3.9 and we executed against the Python 3.7 executable, Python tried to load files from the 3.9 installation. Now we have a version mismatch, and that’s why we got the error.

In the PythonSQLMLS example where the variable was set to Python 3.7, we still got an error, why is that? In this case, the PythonSQLMLS runtime tried to load a Microsoft specific module that does not exist in the “normal” Python 3.7 runtime.

How do we solve this? Well, above I say that the PYTHONHOME system environment variable is required. That is not entirely true. It is required if you want to create an external library for your language. If you only want to execute Python code, then you don’t need it. Having Python on the PATH is required though in either case.

So to confirm that I am not lying, (too much), to you let’s go ahead and:

When we now execute the code in Code Snippet 3 with the @language parameter being Python, p37, and p39 respectively we see the expected result for all three executions!

In that case, we can not use PYTHONHOME as an environment variable, so we need to create a variable with a random name pointing to the Python extension.

Having done that we:

In a future post, we will look more in detail at how to do this.

Based on the errors we received, we determined the issue was with the PYTHONHOME system environment variable. The official Microsoft documentation says this variable needs to be set for the Python extension. That requirement is only partially true, yes - it needs to be set if you want to create an external library for the language extension. However, if you just want to execute code, it is not needed.

NOTE: Something that is not entirely clear in the official documentation is that the Python installation needs to be on the PATH in either case.