I have touched upon the subject of the PYTHONHOME environment variable in the posts, and I have said that it is not needed - UNLESS you want to create Python external libraries.

In this post, we look more at PYTHONHOME and creating external libraries.

I just want to mention something important about installing Python on the SQL Server box:

The reason for mentioning this is that you may get some strange errors when executing if you do not do that.

The starting point for this post is that we have a Python external language created as per:

Furthermore, the expectation is that the language has been created without the PYTHONHOME system environment variable. In this post, I am running against the extension built in the Python 3.9 post.

As in the other posts, I have created the ExtLangDB database. This is the database the external language above is created in. I also use the “built-in” Python in SQL Server Machine Learning Services in this database.

Now is a good time to see that everything is set up correctly. To do that we use the same code as in the other posts:

Run the code in Code Snippet 1, and replace the <lang> placeholder first with Python, and then with the name you gave the external Python language. In my case, it is p39. Both times you run the code, all should work fine.

In R and Python, you install packages/modules typically by being on the machine in question and executing R/Python code:

In Code Snippet 2, we see one way to install an R package and a Python module.

What about doing if for SQL Server? Sure you can do it that way. However, you would need access to the SQL Server box, and those “pesky” administrators may not want to give you access to the box the production SQL Server sits on. What could possibly go wrong?!

So, apart from being on the actual SQL Server box itself, we can install packages by connecting to SQL Server from a remote machine and execute. The different ways are:

The ability to using CREATE EXTERNAL LIBRARY for Python was introduced in SQL Server 2019.

An external library is a package, module, jar file deployed to a specific database using the CREATE EXTERNAL LIBRARY DDL statement. The library is stored in the database and the system DMV sys.external_libraries exposes the installed libraries. The signature for the statement looks like so:

Let us see how this works. What we will do is download a Python package that we want to create as an external library. The package is text-tools.

The text-tools package contains various tools for manipulating text. To use it, we download the .whl file from here. After downloading the package, we need to put it into a zipped archive file. My zipped file is named text_tools-1.0.0-py3-none-any.zip. As we want to install from a file path the zip file needs to be placed in a location where SQL Server can read it.

Before we do any installation, let’s check what external libraries we have in the database already:

When I run the code in Code Snippet 4 I am not getting any results back as ExtLangDB is a newly created database.

OK then, let’s get on with it. We first want to install the text-tools package for the SQL Server Machine Learning Services Python:

As we see in Figure 1 we now have an external library for Python. The question is now if we can use it, and to do that we will use a method in text-tools called find_best_string. The method finds the best matching string in a larger string. It returns either the first match or all matches, and their match value:

In Code Snippet 6 we see how we:

We then call the method with the query, and corpus as parameters, and the result looks like so:

In Figure 2 (outlined in red), we see that we get back the string that matches the best and the match value, cool!

Now, what if we do this using “our own” Python. When I say “our own” I refer to the Python external language mentioned in the Demo Code section above.

I mentioned above how I use Python 3.9 as the external language. If you remember from the Write a Python 3.9 Language Extension …, I recompiled the language extension source code against Python 3.9, and then created the language as so:

We see in Code Snippet 7 how I created the language and gave it the name p39. We ensure all works OK by changing the @language parameter in Code Snippet 1 to @language=p39 and then execute. Yes, it works just fine. To ensure that we have not caused any “drama” with SQL Server Machine Learning Services Python, we can change back the language to Python and execute. This works fine as well.

As the above worked, let us now create the text-tools package as an external library for our newly created language: p39:

After we run the code in Code Snippet 8 we check that all is OK by executing SELECT * FROM sys.external_libraries:

It seems that we succeeded in creating the external library as we see, outlined in red, in Figure 3 the library we just created. Right, so let’s run the code in Code Snippet 6, but use @language=p39 instead, and watch the awesomeness:

Eish, the awesomeness turned out to be not so awesome after all. We got a big fat error as in Figure 4. OK, I suppose that if you have read the previous posts, this error might not be that unexpected. This as I wrote about how the PYTHONHOME environment variable is not needed UNLESS you create an external library.

NOTE: Eish is South African slang, and it can express anything from excitement to horror.

Oh, you may wonder why we could create the external library, as in Code Snippet 8, but when we tried to run it we failed? The short answer is to think about creating external libraries like you create stored procedures. When you run CREATE PROCEDURE the procedure is “registered”, it is not until you execute against it, it is being “compiled”. The same thing is true for external libraries. We will talk about external libraries in more detail and explain what happened here in a future post.

Another question that may “pop up” is why we could execute using the “built-in” Python language without having PYTHONHOME set? The short answer is that I have no clue. I assume it has to do with the tight integration between Python and SQL Server.

I see PYTHONHOME as “the gift that keeps giving”, but not in a good way! Let us see what we can do to fix this.

The output from running the code looks something like what we see in Code Snippet 9:

That’s cool - we can use our external library. However, if we now went back and executed any code, for example, what we see in Code Snippet 1, using @language=Python we would fail. We discussed why in the Solve Python Issues in SQL Server Machine Learning Services After Deploying Python 3.9 post.

After we have executed against the external library for the first time, one potential solution is to remove the PYTHONHOME environment variable and restart the Launchpad service. That works but is not very practical or sustainable. So we need something else.

As we were getting an error about not finding the environment variable, (Figure 5), we can assume that something in the source code is looking for that particular variable. 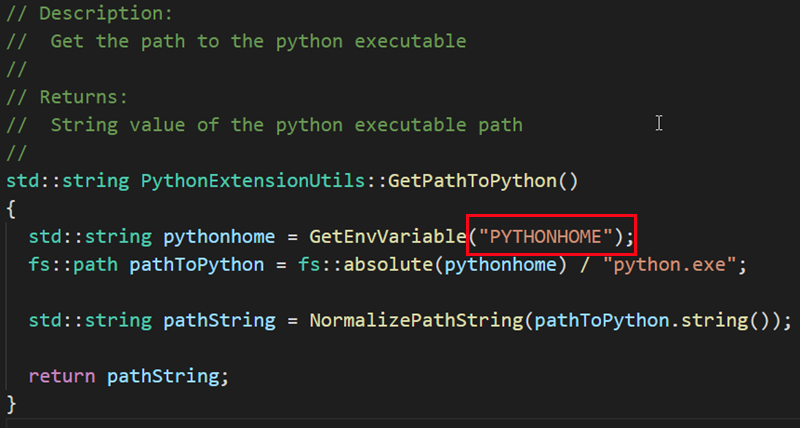 The code in Figure 6 looks up the environment variable, and we see the variable name outlined in red. We can change that name to something arbitrarily, PYTHONHOME39 for example and:

When we execute the code after doing the above steps, we get the result as we see in Code Snippet 9, AND we can also execute any code using the Python language with no errors. Win!

To change the source code works, but it may be too convoluted - especially if you are not a C++ developer. So let us look at another option.

In Code Snippet 7 we see how we create the external language, and we have used similar code in the previous posts. It turns out that in the FROM(...) clause, we can have a couple of more parameters other than CONTENT and FILE_NAME. One of those parameters is ENVIRONMENT_VARIABLES. The ENVIRONMENT_VARIABLES parameter allows us to provide a set of environment variables to the external language runtime. If we do this, the environment variable is not in global scope, but bound to that particular language, in that specific database:

Instead of doing a CREATE EXTERNAL LANGUAGE and having to drop the external library and the language, we can ALTER the language as in Code Snippet 10. The assumption before we run the code above is that we are back to where we are at Figure 4. We have:

In this post we looked at how we can work around that problem, and we saw following options:

Of the three options above, the last seems to be the most practical and least invasive.

Finally, as mentioned previously in the post, a future post or posts will look into how creating external libraries work for external languages.