This post is the first of two looking at if and how we can stream data to Event Hubs from Debezium. Initially I had planned only one post covering this, but it turned out that the post would be too long, so therefore I split it in two.

An interesting point here is that it is not only your Kafka applications that can publish to Event Hubs but any application that uses Kafka Client 1.0+, like Kafka Connect connectors!

Obviously, for you who know me, I said that without having tested it properly, but: how hard can it be? What could possibly go wrong?. Well, I was called upon it by a guy who had read the post. He told me he had tried what I said at one time or the other, and it hadn’t worked.

In this post (the first), we look at configuring Kafka Connect to connect to Event Hubs.

Let us look at some of the moving parts of this.

Azure Event Hubs is a big data streaming platform and event ingestion service. It is a fully managed Platform-as-a-Service (PaaS) with little configuration or management overhead, very much like Apache Kafka in Confluent Cloud.

The concepts are fairly similar between Event Hubs and Kafka, especially if we look at Apache Kafka in Confluent Cloud. There are however a couple of differences in terminology:

An Event Hubs namespace exposes API endpoints to where clients can connect. One such endpoint is the Kafka client protocol endpoint (protocol version 1.0 and above) which is exposed on port 9093 of the host of the namespace.

The previously mentioned post discusses this in more detail.

Kafka Connect is a JVM process (worker process) running separately from a Kafka broker. It is used for streaming data between Apache Kafka and other systems in a scalable and reliable way. Kafka Connect moves the data using connectors, where a connector is a .jar file, and the connector is loaded by the Kafka Connect process. Basically the worker acts as a host for one or more connectors. The connectors come in two flavours:

Connectors are Kafka specific, but since Event Hubs exposes the Kafka client endpoint, we can use (or at least supposedly can) connectors that use Kafka as a sink.

Debezium is an open-source distributed platform for change data capture (CDC). It captures changes in your database(s) and publishes those changes to topics in Kafka.

The post How to Deploy the Debezium SQL Server Connector to Docker looks at Kafka Connect, Debezium, and SQL Server in more detail.

Having had some background information, let’s see what you need if you want to follow along.

The pre-reqs are the same (with a couple of additions) as in the How to Deploy the Debezium SQL Server Connector to Docker post, so look at that post to find out what you need. The additions are:

If you don’t have an Event Hubs namespace and are unclear on how to create one, the Microsoft article Quickstart: Create an event hub using Azure portal covers it in detail. While creating the namespace, ensure you create it under the Standard pricing tier (or higher), as Basic does not support Kafka. 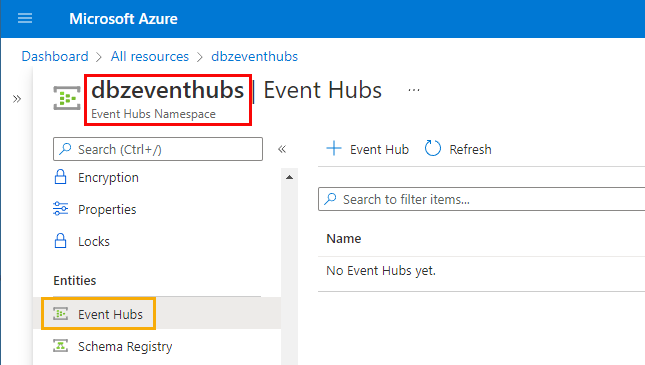 In Figure 1, we see how the namespace is called dbzeventhubs (outlined in red) and that we don’t have any Event Hub (topic) yet.

After you have downloaded and set up the pre-reqs as per the above post, as well as the Event Hubs namespace, we are ready to go. We should have:

We also have an Event Hubs namespace. I named it dbzeventhubs as in Figure 1.

In the Kafka Client and Event Hubs post, I discussed how we need to configure Event Hubs security to allow Kafka clients to interact with Event Hubs. We did it by creating a Shared Access Signature (SAS) policy. We then used the policy’s connection string as the SASL authentication password.

In this post, we do the same, with one difference. In the previous post, we created the policy for the Event Hub (topic), whereas now we do it for the namespace. This is because both Kafka Connect and Debezium need permissions on the namespace level (create event hubs, etc.).

The string we see in Code Snippet 1 acts as the password for authentication. When setting up Kafka Connect, we need to define the bootstrap.servers (the server(s) to connect to). We get that value from the Endpoint field, dbzeventhubs.servicebus.windows.net. We append it with the port, 9093, for the Event Hubs Kafka API endpoint.

NOTE: I am aware that I have “glossed” over the details of SAS policies. Please look at the Kafka Client and Event Hubs post if you need more information.

Cool, we now have all we need to configure Kafka Connect in Docker.

This part, configuring Kafka Connect: how hard can it be? What could possibly go wrong?

Needless to say, it was not as easy as I thought.

As mentioned before, we use a docker-compose.yml and to make things a bit more readable, I have divided the file into three parts: basics, security, and connector. The three parts are represented by the figures below. 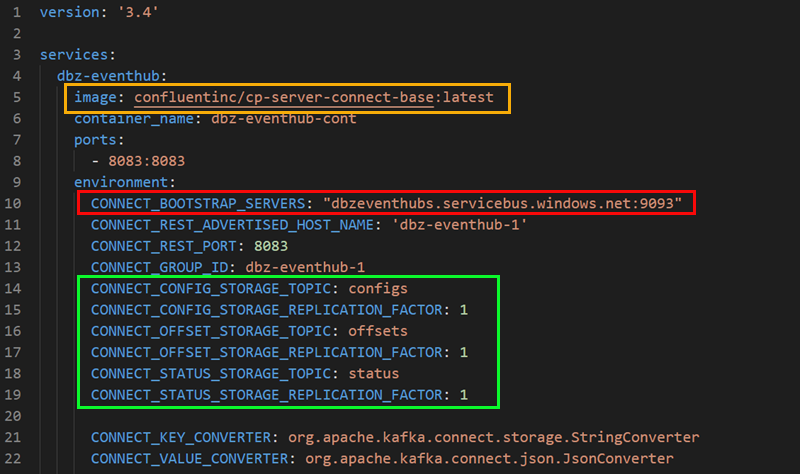 In Figure 3, you see the start of the docker-compose.yml. If you have done any work using Docker Compose before, nothing there should come as a surprise. Let’s have a look at the outlined areas:

Let us go to the security part, where it got a bit interesting for me.

In the Kafka Client and Event Hubs post, I discussed using the SASL_SSL security protocol with PLAIN as the mechanism. Using PLAIN gives us a username/password authentication mechanism. I also mentioned how the password should be set to SAS policy’s connection string value and the username to the “magic” string $ConnectionString (notice the dollar sign). Applying that to this post and the SAS policy we created above, the username password “combo” would look something like this:

In Code Snippet 2 we see how I have taken the SAS policy’s connection string and used that for the sasl.password value.

Kafka (brokers, Connect, etc.) uses JAAS (Java Authentication and Authorization Service) for SASL configuration. So when we set up security for Kafka Connect, we must provide JAAS configurations for this, where part of the configuration is username and password. In addition to the JAAS configuration, we need the security protocol and mechanism. With this in mind, connecting to Event Hubs would look like so:

OK, so with all of the above in mind, the security configuration should look something like so:

In Code Snippet 4, we see the security configuration for the Kafka Connect worker process. This looks good; just be aware of the \ as line continuations and being used for escaping double quotes " inside the JAAS configuration.

I thought this looked good. However, when I tried to “spin up” the Kafka Connect process, I got strange errors saying the ConnectionString (notice without $) was blank. This was followed by the log file reporting authentication issues.

After a lot of head-scratching, I finally figured out that the problem was $ConnectionString, more specifically the $ sign. The dollar sign indicates variable substitution in docker-compose, and when the file is parsed, there is no variable named $ConnectionString. Having finally figured out the issue, it was pretty simple to fix by using $$, which says I actually want to use $ as a literal sign.

After all this the security part of the compose file looks like this: 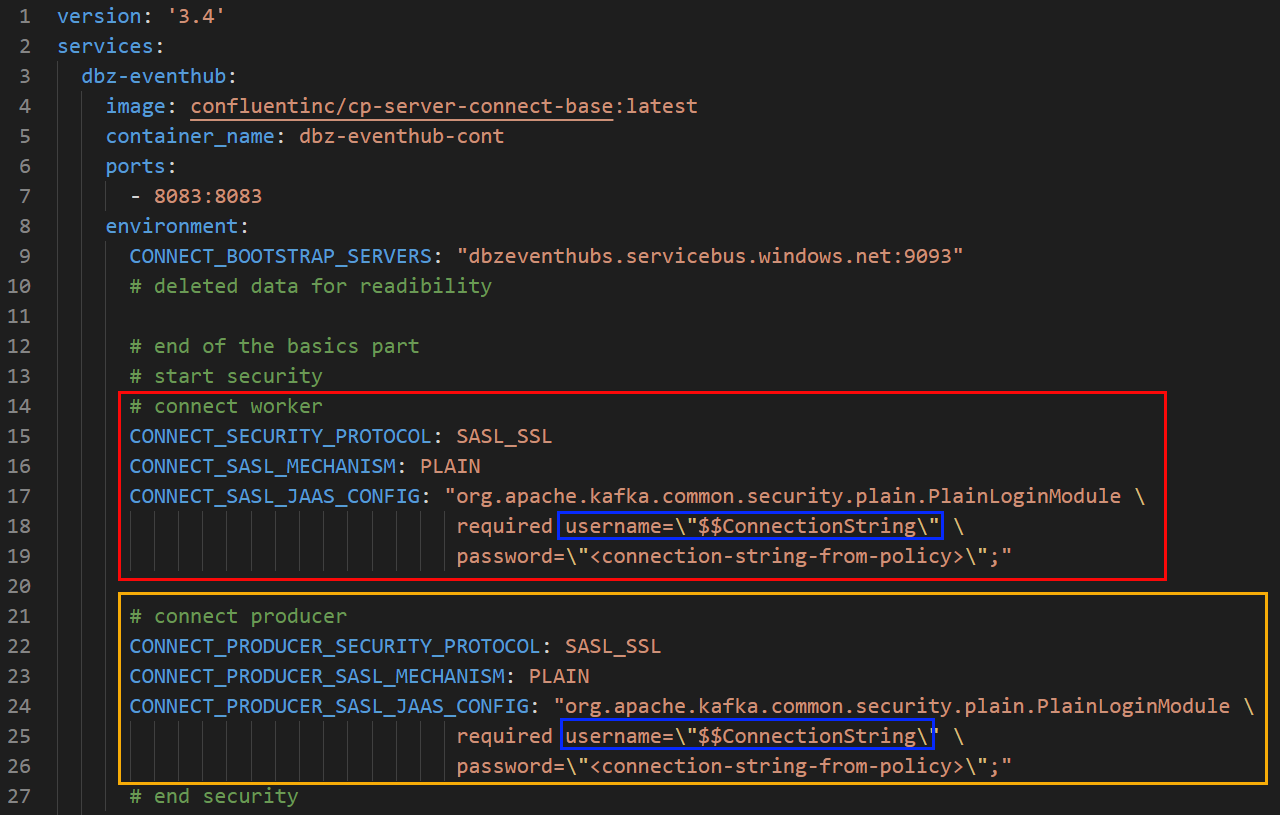 We see in Figure 4 how we configure security for the worker process CONNECT_xxx (outlined in red) and the connector, which acts as a producer: CONNECT_PRODUCER_xxx (outlined in yellow). As discussed earlier, username is set to $$ConnectionString. 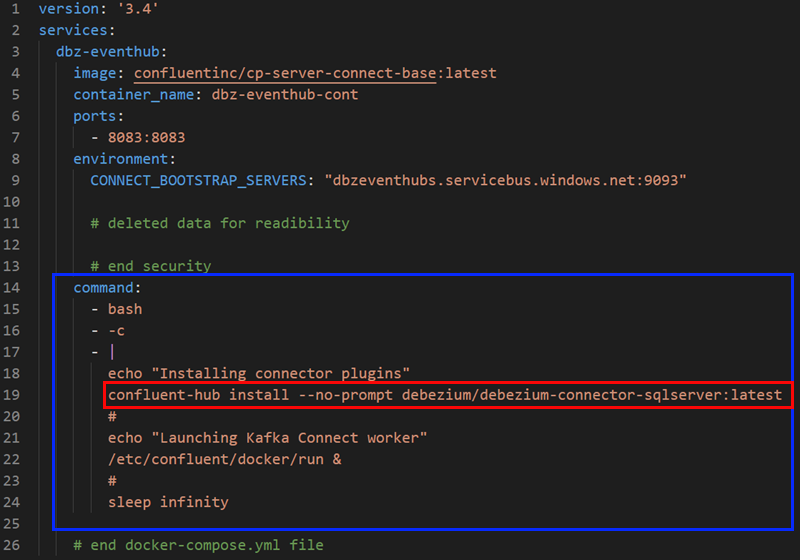 In the command option (outlined in blue) in Figure 5 we install the Debezium SQL Server connector.

NOTE:* If you wonder about confluent-hub, then read more about it here.

When you have come this far, you can do a test run. Before you run this, make sure your Event Hubs namespace does not have any event hubs (topics), or at least none with the same names as your storage topics.

The test run is to ensure that the Docker container “comes up” properly and the connector is loaded into the Kafka Connect worker.

To check what is happening, you can use the Docker Desktop app. When you open it up:

Having clicked on the container, you now see the log for the container as in Figure 7. This is a great help when trying to figure out issues.

OK, so looking at the logs, we do not see anything strange, so let us check two more things: that event hubs have been created, and the connector has loaded.

In the Azure portal, browse to your namespace and click on the Event Hubs menu: 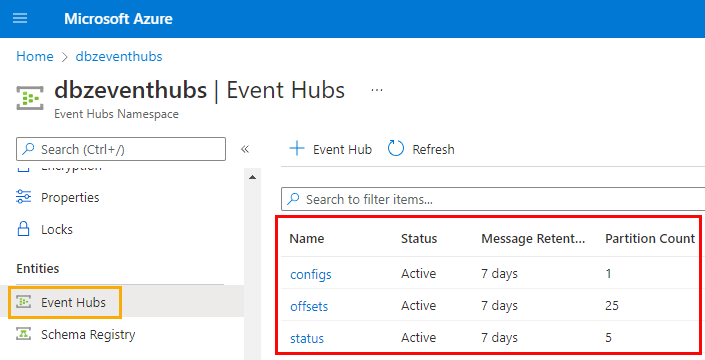 In Figure 8, we see that the event hubs we defined for configs, offsets and status have all been created when the container started. Looking good so far.

In Code Snippet 5 we see how we execute a GET call into localhost (as we host Kafka Connect on our box):

The result of the call in Code Snippet 5 is what we see in Figure 9: we see “our” SQL Server connector together with three other connectors. These other three connectors are all part of the base image we use.

The container is up and running, the event hubs for the Kafka Connect worker has been successfully created, and the connector has loaded! What remains to be done is configuring the connector to capture data from our table. I leave that to the next post, so let us just sum up what we have done so far.

We set out to prove/disprove the ability to stream data from Debezium to Azure Event Hubs. We still haven’t proven that it is possible, but we have come a bit on the way.

In the next post, we look at configuring the connector, and we will see whether Debezium to Event Hubs actually works.